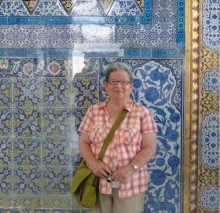 The slew of mass shootings from Aurora to Newtown has Marian Harris ’62 angry. She works for the Ohio Coalition Against Gun Violence, a nonprofit dedicated to educating the public about and encouraging legislation to reduce gun violence.

At Mount Holyoke, a career in political activism wasn’t on Harris’ radar. She majored in physiology and went into education. In 1974, she was teaching pre-school when a student’s mother asked her to help with a political campaign. Harris gave it a try and was soon hooked on the campaign game. She had never wanted to run for office herself; “behind the scenes was what I liked,” she says. But in 2006, she wound up on the ballot as a “placeholder” when no other Democrat volunteered to run in the heavily Republican district. Soon the party chairman stopped looking for a replacement and Harris was the candidate, running to represent the nineteenth district in the Ohio House of Representatives. She was defeated, but ran again in 2008 and won.

In 2010, Harris lost her seat. Now, she does “what needs to be done” at the Ohio Coalition Against Gun Violence. Harris initially joined the organization because they were hiring, but after she learned the facts about gun violence, talked to survivors, and watched the gun death count rise, gun control has become her issue.

On the job, she supervises a campaign to hand out “No Guns Allowed” placards to businesses, updates the organization’s Facebook page, and partnered with Moms Demand Action to organize a statewide rally. She educates legislators and the public, speaking about gun violence to community organizations, religious groups, and anyone else who will listen.

Harris describes her work as frustrating as well as exciting, but doesn’t let the setbacks stop her. “When you read about another child shot or you think about Newtown…well, I wouldn’t want to be doing anything else.”