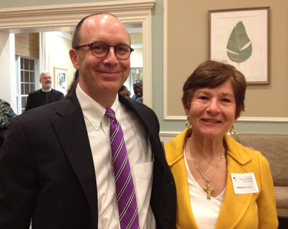 Rebecca Smith Lovelace ’70 had worshipped at St. Paul’s Episcopal Church her whole life, until late last year. Now she’s part of St. Anne’s, a Conway, South Carolina, congregation, worshiping in the chapel at Coastal Carolina University. Here, Lovelace and other Episcopalians have started their own church.

Hers is one of several such groups created following an ideological split within the national Episcopal Church. At its 2012 general convention, leaders voted to allow the blessing of same-sex unions. The South Carolina diocese, including clergy from St. Paul’s, disagreed with this vote and broke away from the national church. The South Carolina diocese “believes in the inerrant truth of the bible; I’m comfortable questioning part of it,” Lovelace says.

St. Paul’s congregants who sided with the national church were suddenly without an official Episcopal home. Scrambling to put new leadership in place after the split, Lovelace took one of six spots as a layperson on the Diocesan Standing Committee. She is now also one of three on the steering committee of St. Anne’s, her burgeoning new worship group that numbers around seventy people every Sunday.

St. Anne’s has several gay and lesbian members holding leadership positions and they recently hosted their first openly gay priest. Several gay couples have sought refuge in St. Anne’s from the icy reception LGBT folks commonly receive at other churches, according to Lovelace. “I didn’t agree that we should have second-class citizens of the church,” she says.

Draped over the altar in St. Anne’s is a cloth that belonged to MHC professor Chris Rivers’ grandmother. They found a brass altar cross on eBay and the hymnals, bibles, and prayer books flooded in from churches from Virginia to Texas. “We’ve had to form a diocese from scratch,” Lovelace says, but adds, “it’s been easier than I thought because so many people have been so generous.”

4 responses to “Rebecca Smith Lovelace ’70: Building a Church from Scratch”