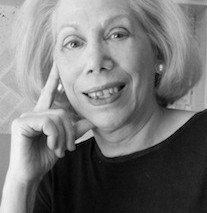 In Leonardo’s Foot: How 10 Toes, 52 Bones, and 66 Muscles Shaped the Human World, Carol Ann Rinzler ’59 delves into history, literature, anthropology, and science to examine what Leonardo da Vinci called “a masterpiece of engineering and a work of art”—the human foot. Rinzler, a health writer and the author of more than twenty-four books, including the bestselling Nutrition for Dummies, is also a former columnist for the New York Daily News and has contributed to numerous publications, including the New York Times.—Taylor Scott

Was there a moment of epiphany when you thought “Feet!” as the subject of your next book, or was it more of a gradual process?

Books happen. You read something or a friend says something or you’re walking down the street and you see something and you say to yourself, “That’s interesting.” Then everywhere you look you see something about the something, and sooner or later the something turns into an idea and the idea turns into a proposal and then, if you’re lucky, into a book. One August morning in 2011, as I was lacing up my sneakers, I looked down at my underwhelming and completely indispensable human feet, and thought, “That’s interesting.”

Let’s talk shoes. What was the most interesting tidbit about shoes that you learned?

I’m not a shoe person; I think the women in Sex and the City were masochists, but the most fascinating thing I came across was that Marie Antoinette wore high heels to her execution. Now there was a woman with a mind of her own.

How did your MHC education influence you in both your profession and your life?

When I went to college, girls—women—were not supposed to be good in science. That wasn’t true at Mount Holyoke, and I was reminded of that when I was invited back to a reunion weekend around 1996 to talk about my then-current book, Estrogen and Breast Cancer: A Warning to Women. When I spoke to other audiences about the book, I had to stop and explain basic concepts. In the auditorium at South Hadley, everyone in the room already seemed to know what I was talking about. It was a genuine pleasure, and I keep those women in mind when I write to remind me to be clear but not patronizing toward my audience.

* Albert Einstein, Stephen King, Tom Brokaw, and Newt Gingrich were turned down by the American armed forces due to flat feet. (The prohibition has since been dropped.)

* Egyptian art depicts ordinary people with two left feet; only the royals and their equals were drawn with both a right and a left foot.

* After a funeral, the coffin is carried out feet first so its ghost will not be tempted to return.

* Virtually every culture on earth has its own version of the Cinderella story and its perfect, small, slim female foot.