Alumna-Student Connection Made by Way of. . . Socks? 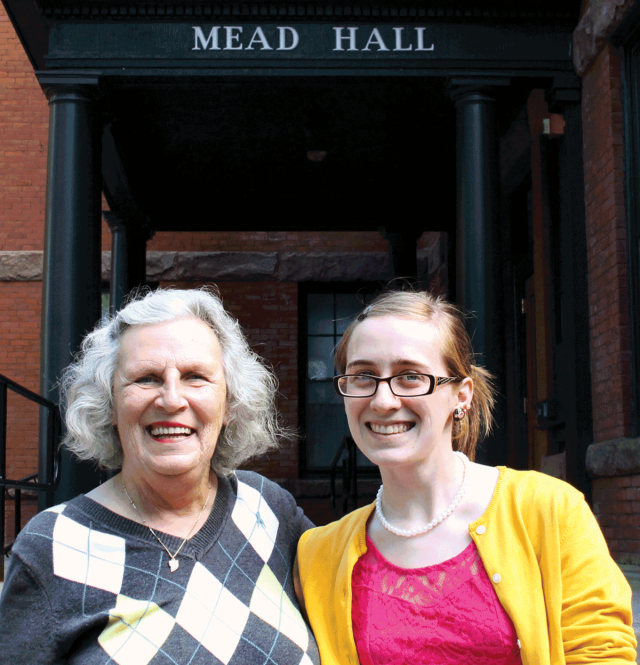 Carol Sweeney Benson ’61 and Megan F. Haaga ’15 in front of Mead Hall, where Benson knit the famed pair of socks.

Megan F. Haaga ’15 was researching the Presidential Papers of Richard Glenn Gettell for a summer job as student assistant to Archives and Special Collections when she came across a unique item—a pair of hand-knit socks. Each sock featured a red beer mug and the initials ‘RG.’ After some digging, Haaga’s research led her to Carol Sweeney Benson ’61, who originally knit the socks for a boyfriend, Robert Graham, but had given them to President Gettell when the couple called it quits. Finding the story fascinating, Haaga wrote an article on the Library, Information, and Technology Services blog and began an email correspondence with Benson. After two months of virtual exchanges, Benson drove from her home in Morrisville, Vermont, to meet Haaga in person. They enjoyed a meal in the North Rocky dining hall, where Benson gave Haaga her own pair of socks from a famed sock store near Benson’s home. The two talked about their favorite MHC traditions, Haaga’s dream of becoming a children’s librarian, and Benson’s own career path—from banker to writer and actress. “It’s funny,” said Benson, “to think that a pair of socks brought us together.” The new friends have vowed to stay in touch.

Junior Year Abroad students studying at University College Galway traveled to Dublin by bus on November 16 and were met by Elisabeth F. D’Agosto ’07 and Ashley M. DeFlumere ’09, who took them to Ireland’s National Museum and Natural History Museum. After running into the Irish rugby team, they went for a bite and a pint. The next morning the students met up with six of the ten alumnae living in Ireland for an early Thanksgiving lunch.