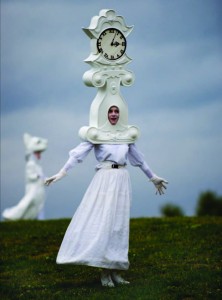 These images are from Neare’s 2008–09 Lullaby Moon performances, a yearlong celebration of the night sky and the world of dreams. Public performances, held on each new moon, brought bedtime whimsy and wonder to parks and other public spaces throughout Seattle, enlivening and enlightening the dark time of each month.

Lucia Neare ’88 just dropped a magical acorn in my hand. We have never met before, so I am struck by the unique greeting. No pleasantries about the weather. No “It’s nice to meet you.” Just a golden acorn. Correction: not just a golden acorn, an acorn made entirely of wishes.

Receiving such a gift from Neare, a Seattle artist famous for the large-scale, mythically inspired theatrical productions she creates, for free, is perfectly fitting. She isn’t the type to hand out business cards. Nothing suits her better than acorn-shaped wood covered in gold leaf and possibility.

As I stare down at my hand, Neare begins to laugh. The sound gets bigger, tumbling out of her throat into the air around us until I am laughing, too. We are standing on one of the busiest streets in Seattle, laughing as if we were alone.

It took just a minute to transform my otherwise lackluster day into one made entirely of wishes and humor.

Dramatic transformation is Neare’s specialty. Those fortunate to stumble into the dream worlds she and her troupe, Lucia Neare’s Theatrical Wonders, create already know this. One need only scan the crowd of thousands to find clear evidence of what’s missing in a city that seems to have everything: magic.

It’s not every day a woman dressed as a giant cake strolls through downtown, and when one does, confusion may result. “People asked what we were selling,” Neare recalls, “and we’d say, ‘Nothing! It’s May, are you in love? Ooo la la!’ People are used to seeing wonderful things, but usually as consumers. We need magic that’s not about buying a ticket.”

That Neare’s elaborate performances are free is certainly magic—a magic that relies almost exclusively on grants and individual donations. Neare’s projects are rewarding in many ways, but not the ways that allow for storing giant horse, swan, and clock heads. That explains why, when I suggested we meet at her house, she just laughed.

“I’d love to have you over,” she said, “but my roommates are multiplying like rabbits!” She was referring to the rabbit heads from 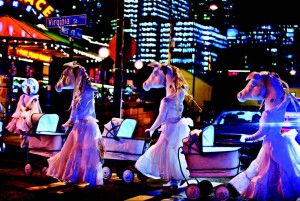 Lullaby Moon. I imagine they’re nestled snugly against the golden eggs from Ooo La La, so I ask how she chooses her characters. Why 150 Lindy-hopping bakers? Why golden eggs? “Why?” Neare gasps, perplexed by the question. “What do you mean, why? That’s just how it’s supposed to be!”

When you consider the large-scale Busby Berkeley-style The Wizard of Oz she put together in high school, her reaction is only natural. It would be difficult for Neare to go smaller after that, considering her influences are P.T. Barnum and Dr. Seuss. Add to that the fact that her operatic training in Western classical music and the south Indian Carnatic vocal tradition have led her to sing both on top of a pyramid and in front of a pod of Orca whales, and you get a better understanding of the lens through which she sees the world.

Neare’s productions are large, she says, not for spectacle, but to awaken wonder in an audience accustomed to staring at tiny screens and inanimate boxes. The grandeur of her performances reflects the import of her message—she wants to teach people that dreams have no size limitations. 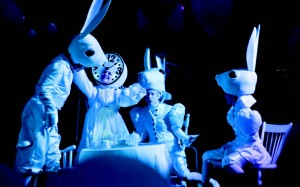 “The question, when you get a big idea, is, how do you go about manifesting it? I want to put a floating canopy bed on Lake Union, pulled by a tugboat, with dancers dressed as horses. How am I going to make that happen?” she says, recalling Lullaby Moon, a yearlong celebration of the night sky, performed at beaches and parks across Seattle. “So many people have big dreams but sometimes get talked out of them. We get a lot of fear driven into us about security. If you knew that anything was possible, would you live in a cubicle, or would you live your big dream? I want to encourage people to live their biggest dreams.”

Some might say her connections to city officials help her accomplish those dreams, but anyone who has seen her work knows the truth. Lucia Neare’s dreams have come true because she refuses to keep them to herself. She has always believed in sharing. Magic works best that way. Most of us used to believe in magic. But then we grew up, and life carried our magic away. Neare knows where it’s been hiding, and has invited it out to play. Why not join her? It’s as easy as looking up at the night sky and following the stars. Should you get lost, a dancing clock or horse-drawn bed will always help you find your way back.

DREAM ON Revel in the magic at lucianeare.org.