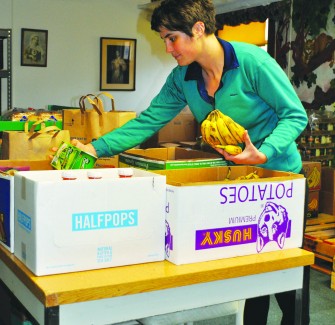 At the Queen Anne Food Bank in Seattle, Washington, basement doors open at 6.30 am. During the morning of any given day, between eighty and 150 hungry people stop by. Food bank overseer Elise Hale-Case ’09 prepares sack lunches and volunteers distribute them to the hungry and homeless. Lunches are handed out five days a week, and hot soup is served three days a week. There’s also a food pantry where people can grab staple supplies.

This scenario was barely imaginable when the food bank funding was cut only months after Hale-Case was hired to coordinate the program at Sacred Heart Church’s adjacent building. The cut temporarily closed its doors shortly before Thanksgiving 2011.

Hale-Case “tripped and fell into this job” after a series of backpacking, climbing, and even dog-mushing temporary jobs in Colorado, Alaska, and Minnesota. She headed back to her Seattle home, answered a Craigslist job ad, and found herself raising over $50,000 for the foundering food bank, which had next to nothing on its pantry shelves or in its bank account.

Hale-Case explained that budget cuts to food banks are unfortunately a growing trend. Funding bodies are concentrating more on backing nonprofits that convey direct and measurable follow-through in eliminating homelessness. While an admirable and indeed lofty endeavor, Hale-Case says this overlooks the immediate need to provide a vital service to the homeless: sustenance.

When speaking with school groups who occasionally volunteer at the Queen Anne Food Bank, Hale-Case illustrates the situation of need with an “upstream/downstream” metaphor. “If there are puppies floating downstream,” Elise explains, “do you run upstream and find out who’s throwing them in the stream? Or do you pick them up as they’re rushing downstream? Well, [the food bank] is very ‘downstream’ work. If you just abandon the downstream work and run upstream, you are losing all the folks that are floating away.”

After media such as the Seattle Times and the homeless publication Real Change wrote about the plight of the Queen Anne Food Bank, donations began flooding in. As Hale-Case concentrated on raising funds to keep the food bank’s doors open, she went without a salary, and used some of what little was left on the food bank’s shelves as she couldn’t afford to feed herself.

But as word spread and donations flooded in, the food bank relaunched in February 2012, with more fully stocked shelves, a full-time AmeriCorps-sponsored assistant for Hale-Case, and a 100 percent increase in kitchen volunteers. Enough money has been raised to ensure another two to three years of operation. But Hale-Case is not resting on her laurels. Reducing her food bank hours to part-time, she returned to school in September to earn her master’s in divinity. With the support of fifty food bank volunteers to help serve hungry people, Hale-Case has been instrumental in making a tough situation for many just a little more bearable.

One response to “Elise Hale-Case ’09: Feeding the Hungry”