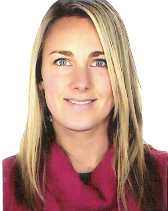 Erica Lutes ’02 has been named executive director of the Fulbright  Commission at the US Embassy in Belgium. Fulbright Belgium, also known as the Commission for Educational Exchange, administers several Fulbright Scholarship Programs for citizens of Belgium and Luxembourg.

QUARTERLY: Can you give me an overview of your role as executive director?   What is the scope of the Fulbright program in Belgium?

ERICA: My new role is to serve as the chief responsible for directing the overall operations of the Fulbright Commission in Belgium. We run not only the Fulbright program for Belgium but also a special program that the US State Department runs with the European Commission (the Fulbright-Schuman). This role is also responsible for the EducationUSA work that is done (another State Department program). In detail, this means managing the staff, the budget, the financial reports for the governments, and so on.

QUARTERLY: When do you begin the new job?

ERICA: Officially on July 1st, which means I will spend the next six months transitioning out of my role [as Fulbright Belgium’s educational adviser and program manager] and training with the current executive director. 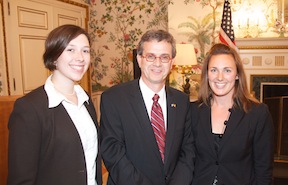 QUARTERLY: Are there any other MHC women in your office?

ERICA: We have had two great interns in our office since I joined Fulbright: Claire Novak ’12 and Hilary Bombard ’12. (Claire Novak is at left in the photo below, with Erica Lutes and US Ambassador to Belgium Howard Gutman). I am looking forward to supporting more Mount Holyoke Interns to our office in future years.

Journalist David Willows interviewed Erica Lutes ’02 for a forthcoming NATO newsletter, from which these comments were excerpted with permission.

DAVID: What’s behind your own involvement with Fulbright?

ERICA: I used to work on Wall Street before coming to Belgium to pursue graduate work at the University of Leuven. While here I was offered the opportunity to work as the staff aide to the US ambassador, and that job led to my position here at Fulbright. My experience here at Fulbright has led me to become a passionate advocate for providing accurate and unbiased information on US higher education to Belgians, and students of all nationalities. Belgium is a country of expats, and I work with people of all nationalities, who, despite their varied backgrounds, often tell me that it has always been their dream to travel to America.

I feel like my work, by helping them achieve their dream, allows me to make a major impact on the lives of these young people. I remember that in my first year with Fulbright, one of the students I worked with was accepted into Harvard. Another student, a French citizen whose parents worked at NATO, was accepted into Juilliard and Columbia. It’s experiences like that which remind me that my work is making a real difference in the lives of people from around the world.

DAVID:  Many of us may have heard of Fulbright, but can you say something about what it actually does and how, in practice, it supports students wanting to study in the US?

ERICA: One major effort by Fulbright is our annual Brussels College Night. At this event, we provide Belgian students with the opportunity to meet face-to-face with American college admissions advisors. Last year over 500 interested students and parents were able to meet with the representatives of over 75 universities with campuses in both the United States and Europe. The event also includes a panel discussion where students and their parents can ask a group of experts for information on the US application process. Students last year felt that Brussels College Night prepared them for what to expect in applying to an American university, and for what to expect from an education in the United States.