Studying abroad is often characterized by adventure and self-discovery, but for Sarah Frimpong ’11, it was also a “six-month sandwich awakening.” While spending a semester in Amsterdam, Sarah became enamored with broodjes (Dutch sandwiches) for their simple, high-quality ingredients. She decided to bring this concept to the Capitol Hill neighborhood of DC upon her return, and after raising $5,132 ($1,632 over her original goal) from a Kickstarter campaign in February 2013, Sarah’s dream has come to fruition. 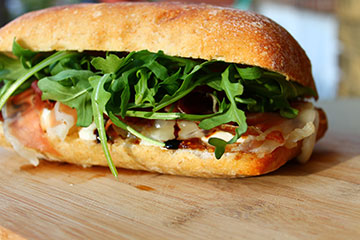 Every morning, from Wednesday to Monday, Sarah lovingly crafts broodjes—filled with everything from bacon salted Nutella and strawberries to prosciutto and fig jam—on locally-baked bread for her prepackaged sandwich concept, Broodje Co., sold at Silver Spork, a nearby café. In an effort to achieve her ultimate goal of opening a brick-and-mortar location, she has also started a series of pop-up dinners, launched a catering program, and built a Broodje Co. cart to wheel around town. With a commitment to fresh, local ingredients and an emphasis on highlighting Dutch culture (eighteen-month aged Gouda, anyone?), Sarah is sure to enrich the DC area, one broodje at a time.