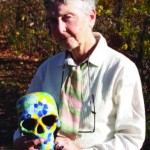 When Eva Steiner Mosley’s mother died in 1971, she got a rude awakening about the somewhat tyrannical nature of the funeral industry.

Shopping for a casket at a Jewish funeral home, she chose a plain, unlined pine box that was only available to Orthodox Jews, the director told her. Her family did not qualify—”We are anything but orthodox,” she demurred—and the casket they ended up with was much more ornate than they wanted.

Since then, Moseley has been part of a growing movement of people interested in making simple, economical funerals and burials widely available and treating death, as it was in centuries past, part of the natural cycle of life.

Eva is a longtime member of the Funeral Consumers Alliance of Eastern Massachusetts, which grew out of Jessica Mitford’s 1963 exposé of the funeral industry, The American Way of Death. The alliance advises families on reasonably priced coffins and burial options, and a few years ago, Eva helped form a subgroup to establish “green cemeteries” in Massachusetts.

Focused on combining simple burials with land preservation, green cemeteries may be tracts of land donated to a land trust, which then serves as a burial site and open space for walking and picnicking. Embalming and the use of other chemicals are not allowed; caskets must be biodegradable and grave markers, if any, are flat fieldstones.

In England, there are dozens of green cemeteries, Eva says, but in this country far fewer. There is a large one outside Ithaca, New York, a few in Maine, and a municipal site in Richmond, New Hampshire. Her group attends land trust conferences regularly and finds increasing acceptance of the idea of green burial—but no suitable land, yet.

For her own resting place, she’d prefer something close to her home in Cambridge, Massachusetts, where she retired in 1999 as curator of manuscripts at the Schlesinger Library at Radcliffe. “The main thing,” says Eva, “is to return to the earth. I find that comforting.”

Alums interested in finding out more about the green cemetery movement may e-mail Eva at esmoseley@mindpsring.com.