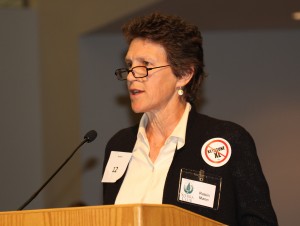 Robin Mann has worked to improve the environment for more than thirty years. Water pollution, air quality, and now climate change have been in her portfolio of concerns since she began working as a local activist for the Sierra Club (sierraclub.org) in the 1980s.

Today, following stints as national vice president for conservation, chair of the Sierra Club’s national water campaigns, and lead volunteer in the development of the group’s Climate Recovery Project, she serves as president of the board of the San Francisco-based organization that is arguably the largest and best known environmental group in the country.

It’s not an easy job: in addition to the all-encompassing crisis that climate change is delivering, she and her colleagues also face, ironically, an orchestrated assault on environmental protection by members of Congress who cloak their interest in dismantling most environmental safeguards in the guise of job creation.

“The whole idea that the economy is not functioning because of environmental regulation is ridiculous—and hugely frustrating,” says Robin, who holds a master’s degree in economics from the University of California at Berkeley. “We have a planet emergency.”

For perspective, Robin reminds herself of darker days in the conservation movement that have come and gone—such as when Interior Secretary James Watt leased vast federal tracts to coal and oil companies—and of conservation successes such as Sequoia National Park, which she just visited.

There are other reasons for hope, she says. The solar industry has had a terrific year, despite the hyped Solyndra scandal. There’s growing interest in mass transit, biking, walking, and eco-friendly cars. And perhaps most importantly, Robin says, there is an alert and engaged generation of young people invested in sustainable solutions.

While Robin will step down as board president next year, she plans to “keep her hand in” the movement at the national legislative level as well as locally in Pennsylvania, where she lives.