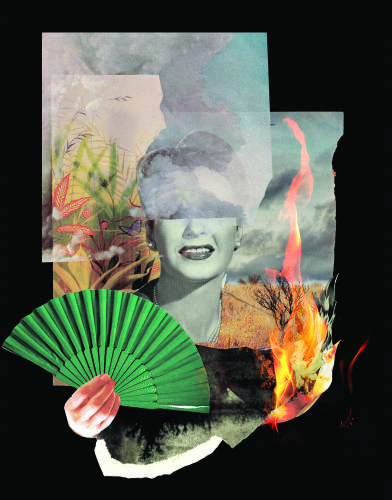 Illustration by Lillianna Pereira
“Is it hot in here, or is it just me?”

I’m in my late 30s and even though I’ve been writing about women’s health issues for over a decade, I knew very little about menopause until recently. Sure, I’d read about the surprising results of the Women’s Health Initiative, which in 2002 halted its largest study on hormone therapy (HT) because it showed that a combination of estrogen and progestin increased women’s risks for heart disease and breast cancer.

I knew that my great-aunt took Premarin for more than forty years and that at ninety-five, she’s never had heart disease and she’s still got supple, unwrinkled skin. And I knew that my mom has tried to go off HT repeatedly, but each time she does the hot flashes and insomnia return—so she’s made peace with taking daily low doses. That this information—gleaned from newspaper headlines and female relatives—was contradictory never bothered me because I saw menopause as a distant phase of my life. In fact, I’ve been willfully uninterested in educating myself about the next big change my body will go through.

I’m not alone. In elementary school, we learn about puberty and periods in Sex Ed and—if we’re lucky— from our mothers, as well. But few of us get a crash course in menopause. “We spend years preparing our daughters for their first periods,” says Jody Phillips- Clark ’82. “We need to devote just as much attention to preparing them for what to expect as their reproductive years come to an end.”

Phillips-Clark was forty-one when she first experienced symptoms of menopause. But because she and her husband were trying to conceive their third child, she assumed her erratic periods were a good sign. “It never dawned on me that I was menopausal,” she says now. “Never mind that I was experiencing dramatic mood swings, night sweats, and hot flashes.” Phillips- Clark was so young—most women hit menopause at fifty-one—that not even her gynecologist suspected she was perimenopausal (the term used to describe the years leading up to menopause). But when her gynecologist finally thought to check her hormone levels, she found ovulation had stopped. “Wham! Bam! Welcome to menopause!” says Phillips-Clark. “I felt like I was suddenly living in someone else’s body.”

Although premature menopause is rare—only 10 percent of women go through it at or before age forty— Phillips-Clark’s experience of feeling unprepared and alone is not.

It’s not that menopause is a taboo subject—women seem to gab about it nonstop when they start having symptoms. “The boomers never shut up about anything,” confirms Pamela Thiele ’70. “So we didn’t shut up about that, either.” But perhaps because menopause signals growing older, women often put off learning about it. “There’s a lot of mystery and uncertainty about what it actually means to go through menopause,” acknowledges Cynthia DeVivo Berkley, MD, ’89, who practiced at the Center for Menopause in New York City for three years. “Until you’re of the age when you’re going to start experiencing it, it’s one of these topics that’s not discussed.”

This is a mistake. “Sometimes a little bit of education and encouragement is enough to get women to deal with these changes,” says Gina Fitzgerald, MD, ’86, a partner at the Westchester Bronx Ob-Gyn Group. “I educate my patients about what’s happening in their bodies—the reverse of what happens when you’re a teenager.”

To make sense of the latest research and determine the most effective non-hormonal remedies for managing menopause symptoms, I interviewed several alumnae gynecologists. None of this is meant to replace the advice of your own doctor. But consider this article a starting point—education and encouragement for embracing this phase of your life.

“For years, we gynecologists thought that hormone therapy was what you did when your patients went through menopause,” says Monique Chireau, MD, ’81, assistant professor at Duke University School of Medicine’s Department of Obstetrics and Gynecology. Not only was estrogen seen as the fountain of youth, scientists also had long thought that hormones could prevent chronic illness, including heart disease and osteoporosis.

The results of the Women’s Health Initiative (WHI), a long-term randomized controlled trial—toppled the established order. “For a long time, people felt that women really benefited from being on hormone therapy. Then suddenly this study said they didn’t,” says Chireau.

The Women’s Health Initiative’s hormone study was and still is the largest trial of its kind—it followed 26,000 women over the course of fifteen years. But it’s worth taking a closer look at the study and how it was designed. There were actually two studies—one followed women who still had their uterus (they took a combination of estrogen and progestin); the other followed women who had had a hysterectomy (they took estrogen only). Experts say that women who still have a uterus should take progestin too, since taking estrogen alone can increase risk of uterine cancer.

It turns out that when you start HT makes a big difference. Women in the estrogen-progestin trial had already gone through menopause when they started taking hormones— their average age was sixty-three. That may account for the increased risk of heart disease, says women’s health expert Tori Hudson, ND. “Now we think there is this therapeutic window. If you could ‘estrogenate’ within the first ten years of menopause, it may decrease the risk of heart disease. But if you wait ten years or more, where the vessels have aged without the benefits of estrogen— when they age, they get stiffer and have more plaque— your arteries don’t like it,” says Hudson, who has a private practice in Portland, Oregon.

The North American Menopause Society (NAMS) published a hormone therapy position statement this year that came to this conclusion: “Women who initiate HT more than ten years beyond menopause are at increased risk for CHD [coronary heart disease], and those women who initiate HT within ten years of menopause tend to have lower risk of CHD.” The panel recommended that women who still have their uterus take estrogen-progestin therapy for no more than three to five years (because of an increased risk of breast cancer) and that women without a uterus take estrogen alone for no more than seven years.

Medical researchers are now also questioning the kind of hormones used in the WHI study: Premarin (estrogen from horses) and Provera (a semi-synthetic progestin). “Bio-identical” hormones, on the other hand, are chemically identical to the ones made in our bodies; these include estradiol and micronized progesterone. Some research suggests that bio-identical hormones may be safer and/or gentler on the system than synthetic hormones, though this remains controversial. There are several FDA approved bio-identical hormones, including 17-beta estradiol (estrogen) and “micronized” progesterone (progestin).

In a recent study in France, researchers followed more than 80,000 women for an average of eight years and found a much lower risk of breast cancer in women who used estrogen combined with bio-identical progesterone than in women who used estrogen combined with synthetic progestin. In the United States this bioidentical progesterone is sold as a pill (under the brand name Prometrium), as a vaginal gel (Crinone) and as a suppository (Prometrium). Michelle Palmieri Warren, MD, ’61, founder and medical director of the Center for Menopause in New York City, emphasizes that the French study was just observational—not a randomized controlled trial. Yet, she uses Prometrium a lot in her clinic and says her patients prefer it to other progestins. “Some people get PMS-type symptoms when they take progestins,” says Warren. “They don’t get many symptoms on Prometrium.”

But not all bio-identical hormones are created equal. In recent years, actress Suzanne Somers and even Oprah have touted the benefits of bio-identical hormones that are custom-mixed in a pharmacy. Warren cautions against these. “They’re untested and unregulated,” she says. “Women like the idea that it’s made up for them alone, but there is no science behind it whatsoever.”

Finally, it turns out that the manner in which you take hormones matters. The women in the WHI study took hormone pills, but more recent observational studies show that transdermal estrogen (taking it via a patch, a gel, a mist, or a vaginal ring) may be safer, especially when it comes to blood clots. “There is growing observational evidence that transdermal estrogen therapy may be associated with a lower risk of deep vein thrombosis, stroke, and [heart attack],” the NAMS panel wrote. Nonetheless, this has not been proven yet with randomized, controlled trials.

There are many safe and effective alternatives to HT, depending on the severity of your symptoms. Before she had experienced hot flashes herself, Fitzgerald didn’t understand what the fuss was about. “So you’re hot. Big deal!” she used to think. “But it’s not the hotness that bothers you. Hot flashes can come with this sense of impending doom!”

Cutting back on red wine or coffee can help, since both are triggers. For women with severe hot flashes, Fitzgerald prescribes the antidepressant Effexor. Warren prescribes Effexor and Pristiq (desvenlafaxine). “The studies on desvenlafaxine are very good,” Warren says. “There’s a very significant decrease in hot flashes.”

Women wary of taking antidepressants might prefer trying a well-studied botanical like black cohosh or its pharmaceutical-grade equivalent, Remifemin. “The advantage of Remifemin is that you know the concentration and what you’re getting,” says DeVivo Berkley, who prescribed it to her patients at the Center for Menopause. Use of black cohosh dates back at least to nineteenth-century herbalist/businesswoman Lydia Pinkham, who included it in her popular remedy for “female complaints.”

Vaginal dryness is a common symptom of menopause— when estrogen levels decline, the vaginal walls become thinner, less lubricated, and less elastic. This can lead to itching, burning, and painful intercourse. Mercifully, vaginal estrogen—in cream, tablet, suppository, or “ring” form—is extremely effective and safe. “It’s not absorbed systemically so it’s thought to be safe even for patients who have a history of cancer,” says DeVivo Berkley. “It works very quickly and can provide tremendous relief.”

For many women, insomnia can be the trickiest symptom to solve. “I hate getting people hooked on sleeping pills,” says Fitzgerald. She and DeVivo Berkley both encourage patients to exercise more and improve their sleep habits. “If exercise were in pill form, we’d give it to every patient!” says DeVivo Berkley. Fitzgerald quizzes patients about their sleep habits, which are often terrible. She tells patients to stop watching TV before bed (that can inhibit melatonin production), go to bed at the same time every night, and cut down on caffeine and alcohol.

To Each Her Own

But some women may need low doses of HT. “Hormones have gotten a bad rap,” says naturopathic doctor Hudson. “That doesn’t mean we should go around willy-nilly prescribing them, but the benefits of hormones should not be underestimated.” Ultimately, you and your doctor have to figure out what’s right for you. “You have to look at the individual history of the patient, her family history—what her personal risk factors are,” says DeVivo Berkley. Fitzgerald agrees. “You really have to take it patient by patient.”

Phillips-Clark decided to go on HT, and she’s glad she did. She tapered off it five years ago and feels fine, though she misses the benefits of estrogen. “We hardly realize all the ways this hormone affects our bodies, our brains, and our emotions until our ovaries no longer produce it,” she says.

This article appeared in the summer 2012 issue of the Alumnae Quarterly.

One response to “Hot Topic: Alum Doctors Guide You through the Latest Menopause Research”