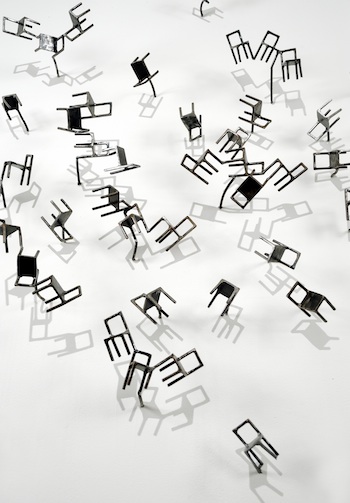 Mimi Frank’s wall installation is eight feet high
by twenty feet wide. Each piece is welded steel
mounted directly to the wall. Each chair is
approximately three by three by three inches.

After teaching for fifteen years at the Catholic University of America, sculptor Mary Annella “Mimi” Frank ’76 now works full-time on her art. She has exhibited widely across the country. Currently at work on a commission for the Dartmouth (Massachusetts) Natural Resources Trust, Frank also has a show of her work scheduled for late 2013 at the Howard County Center for the Arts in Maryland.

A survey of her work is at maryannellafrank.com.

In Cassiopeia Dreams of Better Days,
Frank relates how, in Greek mythology, the
beautiful Cassiopeia was punished for her
vanity and tied to a chair that rotates in the
night sky. “The chair represents so many
things to us,” Frank says. “These chairs tell
us a little about Cassiopeia and her regrets,
but they are really about our relationships
with each other.”