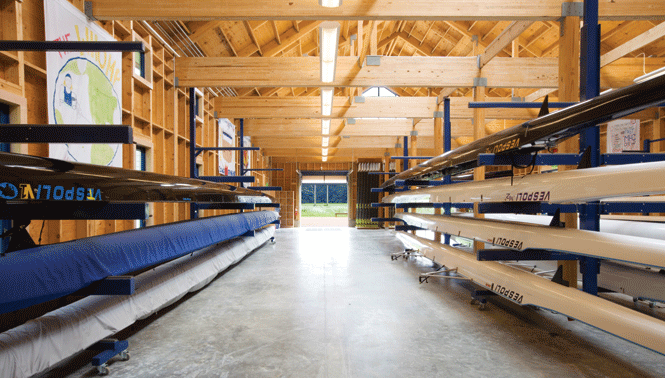 The boathouse is 1.5 miles from campus on an 8.5-acre, College-owned parcel of environmentally preserved land.

Crew began at Mount Holyoke in 1976 and has grown from a small club to one of the College’s largest varsity sports with approximately sixty-five rowers in the fall and forty-eight in the spring.

The College completed construction of the boathouse in April 2010. Previously, the crew program was housed next door at Brunelle’s Marina. In July, a devastating five-alarm fire destroyed the marina’s Dockside Restaurant and service center. Both are in the process of being rebuilt.

The novice and varsity teams practice six days a week from 5:30 to 8:00 a.m. from September through October, and mid-February through early May.

The boathouse is built on a 100-year floodplain, or an area that has a 1 percent chance of flooding in any given year. For this reason, the structure has a waterproof room that houses its electrical equipment and multiple louvers built into each side of the boathouse that allow water to flow through when raised.

The crew team owns approximately twenty boats, the largest of which cost $35,000.