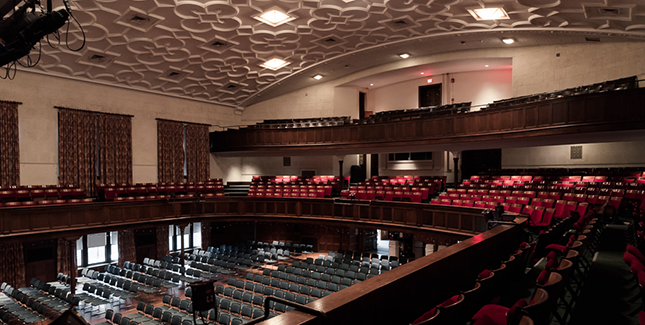 In 1899 students and alumnae came up with the idea for a shared building, one that would be a headquarters for student organizations and a home for visiting alumnae. After years of planning and fundraising by students, faculty, and alumnae, the new building—Student Alumnae Hall—was dedicated in June 1916. In 1945 the College renamed the building Mary E. Woolley Hall, after Mount Holyoke’s eleventh president. 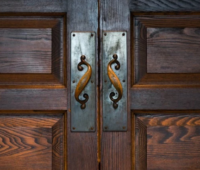 Like the exterior of the building, the auditorium is decked out with Gothic details. Two sets of heavy wooden double doors outfitted with sturdy brass S-shaped handles open into the space from three floors. The hardwood-floored arena level is adorned with dark wood rectangular insets and ornate metal heating grates in the walls. An arch decorated with a quatrefoil design frames the apron of the stage, from which two sets of steps descend to the floor. Tall windows, outfitted with heavy flowered curtains, run the length of two sides of the room on both the first and second floors. The bright white ceiling, arching gently overhead, features enormous extruding quatrefoils that resemble giant four-petal blossoms. 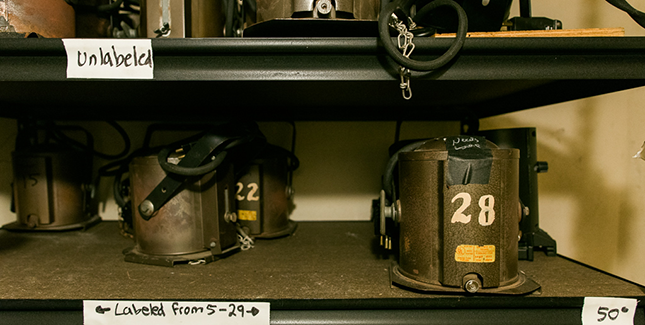 Sturdy wooden columns support the balcony, which wraps around the room like a horseshoe and holds several rows of wooden chairs with red velveteen seat cushions. The control booth is situated squarely in the back of this tier where sound and lighting are managed during performances. Perched above it is a smaller top tier of seating with a side stairwell leading to the second level.

Backstage is also made up of three floors. On the first, a closet reveals lighting instruments and scrims. Two small matching dressing rooms contain the basics: a sink, countertop, chairs, and mirror encircled with lights. Cables, chairs, rugs, music stands, ironing boards, and a baby grand piano are stored in the wings, where five rows of heavy black curtains are draped. 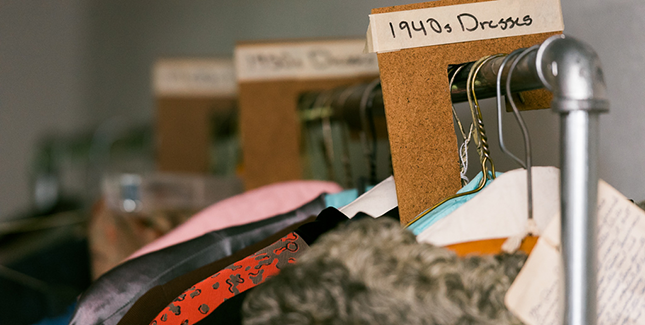 A detail from some of the hundreds of costumes that span more than a century in a closet on the top floor.

A spiral staircase is discretely situated in a back corner, leading up to the lighting gallery, where the lamps are hung. The fly system is balanced with fifty-pound sandbags suspended by thick black ropes draped over pulleys. A skinny metal stair leads to the rafters high above the stage. Three more dressing rooms of varying sizes are tucked away stage right on the second floor. And at the top of a long staircase on the third floor, four large closets hold an antique clothing collection, with pieces from as early as the 1800s, literally keeping the building’s history on hand.

On its hundredth birthday, Chapin looks almost exactly the way it did when it was first built—beautiful, distinctive, and ageless.