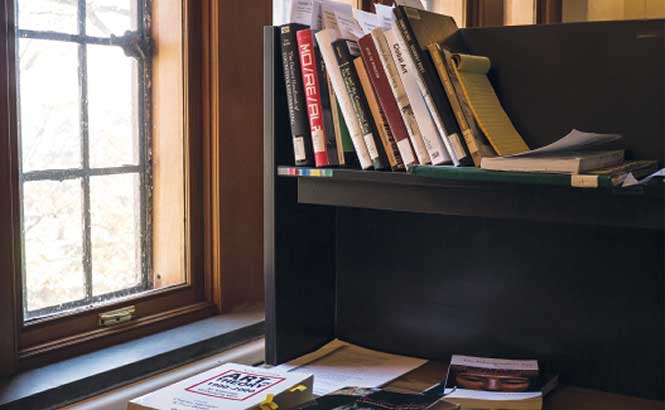 The Mount Holyoke libraries house 180 carrels—scattered throughout the Williston and Miles-Smith stacks—where seniors study, snack, sleep, and store mountains of books gathered for researching and writing a thesis.

The selection process—once chaotic, according to circulation manager Karen Mehl—has been refined over the years. On a Sunday morning last September seniors—many of whom had camped outside overnight—were given a number as they entered the library. Each then made her way to Whiting Alcove, where she crossed off her carrel of choice on a large map.

In the past eligible juniors grabbed the few carrels that remained after seniors claimed the ones they wanted, but in recent years all carrels have been spoken for within the first three hours of assignment day. 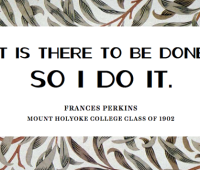 Download inspirational quotes from Mount Holyoke alumnae and faculty to post near your own desk.
Web exclusive

The most popular carrels are on the sixth floor of Miles-Smith, because the windows open and offer the best light, the bathroom and water fountain are nearby (but not too close), and, most important, it’s a quiet floor.

The carrels on level one Williston are the last to be claimed, because the floor is underground, and, students have told Mehl, the space feels a a bit “creepy.”

Students personalize their carrels with more than just books. Over the years, librarians have seen everything from holiday lights hanging from the pipes to shower curtains mounted as doors to one memorable space set up to resemble a tiny office, complete with carpet, throw pillows, and a couch. Now, fire regulations prohibit such elaborate decor, but students still adorn their carrels with postcards, posters, photos, and pennants.

Once considered property of the seniors, carrels now officially are deemed library space and may be used by any student when unoccupied.