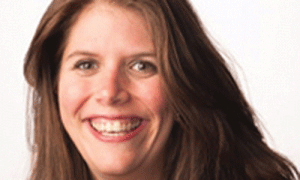 When Superstorm Sandy destroyed communities along the coastline of New York and New Jersey, Jessica Klein ’02 joined the scores of people who rushed to help first responders, family, and friends. Klein, a native of Rockaway Beach—a neighborhood in the borough of Queens—realized that more than on-the-ground assistance was needed to rebuild the community in which she grew up. An infrastructure of communication was key, and so, along with two friends, Klein cofounded RockawayHelp, an organization that uses local news and community-designed technologies to empower citizens of the affected area. Klein also organized the Rockaway Civic Hack Day, where designers, developers, and community members came together to build tools and apps for emergency preparedness and response.

In July, Klein was named a White House Champion of Change for her work not only with RockawayHelp, but also the Mozilla Open Badges project, which allows learners to earn credentials, or “badges,” for skills and expertise they can then display around the web. Champions of Change are Americans who are doing “extraordinary things in their communities to out-innovate, out- educate, and out-build the rest of the world.” Learn more about RockawayHelp and Klein’s accomplishments at rockawayhelp.com and whitehouse.gov/champions.