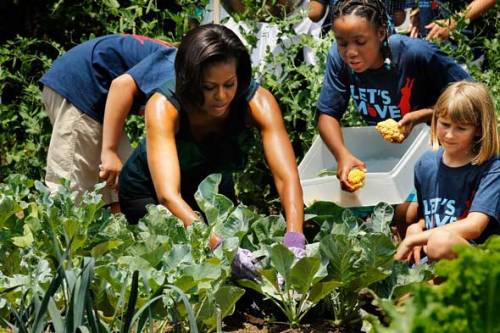 When the news first hit that Michelle Obama was starting an organic vegetable garden, I became obsessed, reading everything about it. As a passionate locavore and organic foodie, I can’t begin to describe the thrill I felt about her garden. As a black woman, my first thought went to the ancestors who built the White House, imagining their pride and joy in watching one of their daughters as she reminded the world of their legacy in ways they could only dream about.

Don’t get me wrong, I am not “post-racial,” but I didn’t have any of the racial anxieties that numerous brilliant black women bloggers and academics have written about in relation to the First Lady’s garden. Instead, I immediately wanted to know the veggies Michelle Obama was planting, who was helping her, and whether this was her first garden. I wanted to know what Michelle Obama’s favorite veggies were; if like me, she loved collard greens and Brussels sprouts. I even wanted to know what books and resources she used to learn about gardening so that I could read them too. It’s no secret that the First Lady was really the Obama I wanted to vote for last November, but Barack is all right too.

When I saw the New York Times’s picture of Michelle in the garden with DC children, I became emotional. At first, I had no idea why. Then it hit me: I spent my early childhood in a vegetable garden. The experience never left me even though I didn’t learn about it until last year, several decades later.

My father was a Black Panther Party and Black Liberation Army member,and he’s been in prison since I was two. Nothing can prepare a two-year-old for the trauma of losing a parent, especially one as loving and giving as my father. My dad was a doting parent then, and he’s a doting father and grandfather now.  The story of my connection with vegetable gardening and my new home in Durham, North Carolina, affirms this.

Amid the chaos and confusion of his own violent arrest in 1972, my father showed he considered his children’s safety before his own. To keep my siblings and me physically safe (mental and emotional safety had to wait), my father sent me to Southern Pines, North Carolina. The location was supposed to be a temporary stop enroute to Cuba, where I would reunite with my mother and other family members. It didn’t pan out that way. I lived in Southern Pines for approximately four years, in the home of my father’s sister and “Momma,” the doting mother-in-law whom I accompanied in the garden each day I was there.

I have no intellectual memory of this, but my body remembers. There are no pictures; there were no stories, nothing…until one year ago, when my father’s older brother died and I began to ask questions. The answers hit me like a bombshell: talking with surviving relatives, I realized that I’d moved forty-five minutes away from the very homestead that nurtured me as a toddler after my father’s incarceration. I internalized the experience, so much sothat, like a salmon to its birthing stream, I moved to the same rural Carolina land that once provided a glimpse of peace amidst an unraveling trauma.

And as I watched the television footage of the First Lady in her garden, raking leaves, surrounded by DC children, I considered the impact this experience would have on them. No one has discussed the fact that these are children who most have written off. The picture of Michelle Obama creating a garden with them may be symbolic for all kinds of people, and for all kinds of reasons. For me, it was an invitation to unpack a history that was lost tome, but is no less significant today.

Again, I lived with my paternal aunt and her family in Southern Pines.She remembers me as a two-year-old in a sundress and sunhat, up at the crack of dawn with Momma in the vegetable garden. Everyday, my aunt recalls, I wanted to wear that same dress and hat, those same shoes and socks. If anyone tried to stop me, there was hell to pay. Apparently, I was as stubborn then as I am today. My aunt said that, that little two-year-old wanted to be out in the garden all day long. So Momma had a gardening buddy the entire time I was there, and she loved the company. I never left her side.

The idea that I lived for several of my most formative years in the rural south with Black people who grew their own food—not having to rely on others to feed their children—blows my mind. At two years old, I was getting a powerful lesson in self-sufficiency and in life’s seemingly small, daily joys,lessons few have access to anymore. I’m convinced that what I learned then about how food grows gave me the strength to get here: a fulfilling adult life marked by the richness of motherhood, a large family of friends, and anintegrated career where, as Kahlil Gibran said, work is love made visible.

When I was barely more than an infant, my entire family was ripped violently apart. I didn’t see my mother for years. I used to be haunted by questions of how that little toddler coped. I now know that at age two I was being taught, through Momma’s vegetable garden, to have faith in something I couldn’t see right away. I was being taught that sometimes hope is all we have,and that, that’s okay. I was being taught that when people work together,everybody survives. I was learning to be flexible, and that asking for help is critical. I was being taught that if I was willing to work hard and have patience, I would be blessed beyond my expectations. And finally, I was being shown that, as Alice Walker has said, “everything we love can be saved.” At two, I was being taught I could grow something. I was learning at that tender age that health, beauty, joy, and love were possible even in the midst of unbelievable pain and devastation. I know Momma’s North Carolina vegetable garden helped save my life in ways I have yet to discover.

None of my adult habits made sense to me until events like my life in Southern Pines were unearthed. As a kid, I remember feeling different from other children my age, who were more interested in sleeping-in on weekends. I was always up at the crack of dawn, methodically planning my day. I figured that if I got up early enough and finished my chores, I would have more time to do whatever I wanted. This habit was surely fruit from buried memories of daybreak in the garden. Similarly, I never understood, until now, why I never met a vegetable I didn’t like or why I usually preferred vegetables over candy.Most important, Momma’s garden helps explain why I always had a vision. If you grow your own food, you know you must have a vision and faith that what your plants will eventually grow.

Although my aunt told me about this lost part of my childhood, she doesn’t have pictures of me in that sundress or sunhat. So I ripped Michelle’s picture out of the New York Times and put it near my computer because it helps me tap into an experience that still sustains me. Despite the fact that intense loss, pain, and confusion have taken permanent root in my bones, it has never been able to permanently rob my empowerment. I work hard to live in my blessings, not my problems, but when things feel tough, when realities like the fact that my father is still locked up after thirty-seven years pound at the doors of my heart and head, I try to remember that, at two years old, people taught me how to dig into my soul, have faith in the unknown, and grow whatever I want. In these precarious times, Michelle Obama’s garden also teaches us to sow a vision that feeds faith, love, and community instead of fear, despair,and loss.

Crystal M. Hayes is the proud mother of her seventeen-year-old daughter Myaisha. Crystal was a double major and received her BA from Mount Holyoke College in African American studies and Politics.  She received a master’s degree in clinical social work from the Smith College School for Social Work and is currently applying to attend a doctorate program in maternal and child health. Crystal lives in North Carolina and is currently writing a book about race and motherhood. Crystal’s clinical experience includes maternal and pediatric mental health at Duke. Crystal is also the codirector of the Racial Justice Program at the YWCA of the Greater Triangle.Her research and writing interests are gender, civic participation, Black life and culture, and social policy.  Crystal is a dynamic public speaker who addresses wide audiences from youth groups, to colleges, churches, and other organizations. Crystal can be reached at crystalmhc@hotmail.com or chayes@ywcatriangle.org. This article appeared in the summer 2009 issue of the Alumnae Quarterly.