Liza Connolly ’84: Spreading the food revolution, one ravioli at a time 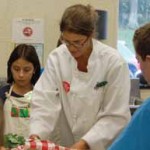 David Letterman once did a hilarious bit where he led his viewers on a tour of a New York City farm, which consisted of a grass strip in midtown Manhattan with boxes of frozen food “growing” in neat rows.

It’s a joke that Liza Connolly ’84 would find compelling. Cofounder of Kids Cooking Green in Lexington, Massachusetts, Connolly wants her students to understand that America’s food heritage is more about the juicy, sweet apple grown down the road than the
frozen lima beans snagged from a big-box store.

Liza worked as a chef for more than a decade, helped start the farmers’ market in Lexington, and was looking for a way to bring the healthful lessons of that vibrant food setting to elementary schools. After a yearlong partnership with Spoons Across America, a national culinary arts program for children, she and her work partner, Lori Deliso, split off to focus on Boston-area schools.

Now in their fifth year, Kids Cooking Green charges $175 for fifteen hours of class and a dinner for a family of five. The five-week programs are offered twice a year in five suburban schools and through three recreation programs. Their focus is on healthy foods, local agriculture, and eating seasonally.

“In the first class,” she explains, “we’re cutting up local apples and cheese for a snack. Then we make fresh pasta.” Their handmade raviolis are sent home and shared with their family. And because the kids have bought into the process, they push for the same kinds of foods at home.

She and Deliso hope to expand the program to at-risk children in Boston. “The only things I have ever learned in my life I have done with my hands. Now,” Liza adds, “we’re teaching kids to listen to their bodies.”