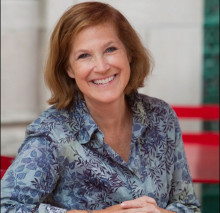 Since its inception in 2000, Holly Hughes has been editing the Best Food Writing series, which highlights culinary trends through epicurean-inspired stories and essays. With titles like “Still Life with Mayonnaise” and “Truffle in Paradise,” the Best Food Writing of 2012 examines food from the everyday to the exotic. Prior to editing the series, Hughes was a magazine writer and executive editor of Fodor’s travel guides. She lives in New York City with her husband and three children.

I read an interview in which you said, “I love for people to know I’m not a food writer myself; I’m actually not a very good cook.” How did you become interested in food writing?

It was a gradual immersion —one might even call it a “slippery slope.” When I was still editing travel guides for Fodor’s and Frommer’s, and hiring food writers to write our restaurant sections, I realized that I enjoyed read- ing descriptions of meals and food memories even if I had no intention of ever dining at that restaurant or cooking that meal. I like to think of Best Food Writing as a book you’ll find on the bedside table rather than on the kitchen counter—it’s for reading and musing over, not for cooking from. And by the way, I do enjoy cooking, especially now that my children are older and no longer stuck in a repertoire of chicken fingers and mac ’n’ cheese. 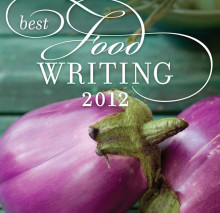 What are the trends in the world of food that you’ve noticed with this last edition?

There has been a gradual deepening of food journalism in the past few years dealing with the politics of food. Beyond that, however, particular topics ebb and flow. Vegetarians grabbed a lot of press for a couple of years, and then there was a backlash of meat-eating articles, for example. This year we had a lot of male writers describing this sort of macho vision of grilling and barbecuing, which I set up in a section titled “Dude Food.” I suspect that’s a backlash against too many dainty cupcake features.

Is there an essay that has particularly resonated with you over the last thirteen years?

Shortly after 9/11, Brett Anderson of the New Orleans Times-Picayune wrote a lovely, poignant piece about dining out the night he learned that one of his best friends had died in the World Trade Center. That moved me deeply. Brett did it again in 2006 with a piece about his last dinner before Hurricane Katrina hit New Orleans. Those were perfect examples of how food writing can be about something so much more than “just” food.

I prefer not to think about that!

What was your experience like at Mount Holyoke? Did it have any influence on your love of food writing?

The early ’70s was still kind of a hippie era, so occasionally we’d have small dinner parties where we baked our own bread or made pots of lentil stew on a hot plate (seriously!). But Mount Holyoke did give me a deep sense of shared meals as a bonding experience. Back then, every dorm had its own dining hall, and most meals were spent with the same people. Dinner was served by waitresses, not buffet-style. It was a comforting way to gather every evening.