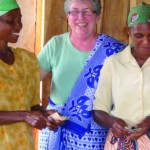 A few years ago, Mary Ann Sparklin Woodruff ’60 and her partner were looking for volunteer work in Africa. So they hooked up with Cross-Cultural Solutions, an American organization that links interested volunteers with grassroots nonprofits abroad. That was the start of a long-term relationship between Mary Ann and the rural women of the Kilimanjaro region of Tanzania.

She was sent to work with the Women’s Education and Economic Centre, a group founded in 1999 by three women from Tanzania’s tall peak area to combat poverty and discrimination. Women are poorly treated in tribal Tanzania, and the founders’ goals were to offer microloans for economic self-sufficiency; education in leadership, business, health, and legal rights; and counseling and litigation support for women’s rights.

On a recent return trip, Mary Ann, a retired organizational consultant, visited with women who were part of a village cooperative bank, a new Centre microloan initiative in remote villages. The bank consists of thirty village women divided into six groups that decide who gets a loan, and then vouch for its repayment.

The bank is a metal box that requires three keys to open. Each key is entrusted to a different woman. The women meet monthly to open the bank. They count the cash and publicly record the amount. The bank is then stored in the home of the village leader until the next meeting.

On her first trip, Mary Ann met a few women who had started selling vegetables on the street and now had a small stand with a roof; women who were running a beauty parlor; and even the wife of a member of parliament who had taken out a loan in secret, to avoid his reprimand. Mary Ann says she wondered what he made of the cow that was now providing milk for his family.