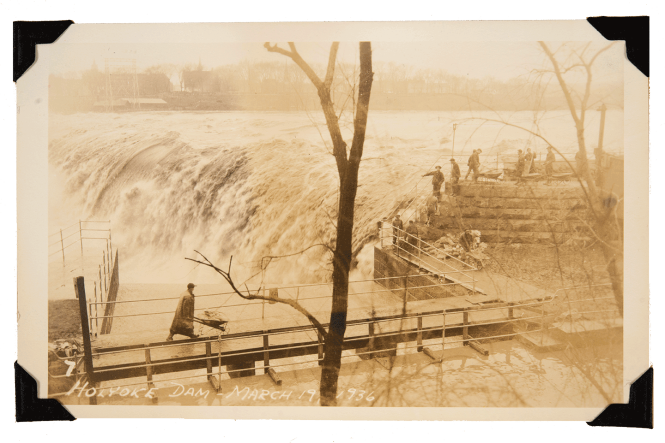 In the early days of March 1936, Mount Holyoke students had one thing on their minds: mid-semester vacation. Winter had been especially tough that year, with record snowfalls and long stretches of extreme cold. Letters and telegrams home included details of train tickets, packing, and exams. The last thing the women of MHC expected was the greatest natural disaster ever recorded in the Pioneer Valley.

During the winter of 1935–1936, the frozen Connecticut River formed blocks of ice as large as automobiles. When spring descended on the area, the ice and snow rapidly began to melt. The combination of melting and heavy spring rains produced, according to the Pioneer Valley History Network, “an unheard-of triple blow that led to deadly flood conditions.”

In a letter to her parents, first-year student Barbara Johnson White ’39 wrote, “The streets are regular rivers. At present there is the possibility of no spring vacation Friday.” In fact, the College did prohibit travel until the following Sunday. Fellow first-year Ruth C. Andrew ’39 wrote in her college scrapbook that it took her thirteen hours to get to her home in Hackensack, New Jersey, nearly double the normal duration of the trip.

Students, parents, and college administrators quickly realized just how wise their decision to delay the break and keep everyone on campus had been. During the height of the flood bridges gave way, isolating many towns and cities, where looting began. The National Guard was called in with orders to “shoot on sight.”

Once the waters receded, Springfield resembled a war zone, and health officials—worried that an epidemic would break out—rushed to immunize the population against Typhoid fever.

Because the Mount Holyoke campus is situated on high ground, school buildings sustained little damage in comparison to the rest of the region and classes resumed on schedule. But across the Northeast the flood caused 171 deaths, nearly half a million people were left homeless, and the cost of the disaster totaled $500,000, equal to about $8.4 billion today.