Music That Speaks for Itself: Zeb Bangash ’04 Is Half of Pakistan’s Hottest Pop Duo

Mubarik Ali Khan, a top classical Indian music vocalist, showed little enthusiasm when Zeb Bangash ’04 was introduced to him as a possible student in 1999. However, after her first lesson—a test run taking Bangash through basic scales to gauge her voice and musical sense—his indifference melted. “From now on I have made you my daughter,” Khan said. “If you are willing to work hard, you can become a classical vocalist.” 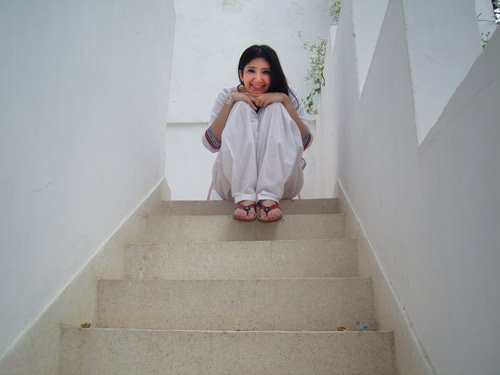 Khan can spot talent, classical or otherwise. Today, Bangash (above) is the vocalist, and her cousin Haniya Aslam is the guitarist, for what Newsweek called “one of Pakistan’s hottest pop duos.” Zeb and Haniya have Pakistani critics and musicians raving.

“Zeb has infused her classical training into a Pakistani version of soft-rock,” says Pakistani guitarist Foaad Nizam. “She and Haniya have brought the singer-songwriter tradition to Pakistan. I would compare them to Tracy Chapman.” Others have called their genre-busting music alternative, art folk, ethnic blues, world music, even easy listening.

Pakistan’s top weekly, The Friday Times, praised their debut album, Chup (Hush!). “This is the most influential mainstream production work out of Pakistan as yet. It has raised high the standards of songwriting and live recording in Pakistan,” according to the Times.

Although Zeb and Haniya avoid overt political references in their songs, they are revolutionary simply as female singer-songwriters performing in public. Both come from a modernizing urban middle-class background that provided few female role models in music or the professions. Fifteen years ago, women from their background were housewives or, at best, teachers and professors. Any musical training women received was Jane Austen-style “accomplishments.” And singer-songwriters—male or female—are rare in Pakistan, Bangash says. “The whole scene for women musicians is so limited” that there’s no vocabulary for describing what they do.

And the women are Pathan singers at a time when Pathan culture is in a conservative freefall. Five years ago, the then-ultra-religious government of Pakistan’s majority Pathan North West Frontier province banned music in public places, incarcerated musicians, and tacitly condoned bomb attacks on music and video shops. In that context, the two make a statement just by singing in Pushto, the Pathan tongue. “You can’t suppress our songs, our culture, and centuries of tradition by imposing extremist views on society,” says Bangash.

The songs on their album reflect Pathan musical influences, but also those of Lebanese vocalist Fairuz, and others. One of the band’s biggest hits—Paimana Bitte (Bring the Flask)—adapts Fairuz’s “sultry, jazzy style to Pushto and Darri [Afghani Persian] folk.” This style is threaded throughout their album, with Bangash’s voice—perfectly pitched and accented by nuances and inflections—nimbly moving between or holding notes because of her Indian classical training. Aslam adds a heavier voice and guitar accompaniment. A changing group of musicians backs the duo on everything from sarod (a deep-toned stringed instrument) and drums to trumpet.

Bangash and Aslam understand one another well, musically and personally. The two have known each other since they were toddlers and are practically sisters. They live together in Bangash’s family home in suburban Lahore; both are single.

They have always been interested in music—Bangash recalls, “it has just felt right when I sang ever since I was a child,” and Aslam played classical Indian drums as a teenager—but these interests had been channeled into classical Indian music.

It was at college—Aslam studied at Smith College when Bangash was at Mount Holyoke—that they started practicing together. They performed informally and for student events at both colleges. They also started experimenting with Western music, and date their musical partnership to one winter break. The cousins were snooping around the Wilder Hall basement one day when they came across an abandoned bookstore-cum-café. There, surrounded by spiderwebbed coffee mugs, dusty chairs, and bookshelves, Aslam brought her guitar, and, half joking, Bangash sang. The genesis of Chup, their album’s title song, was in that basement.

They kept practicing throughout college and continued in Pakistan, where Aslam started teaching anthropology at an art school and Bangash joined her brother’s business, importing massage chairs from Singapore. The duo’s sound gelled and improved, and in 2003 they uploaded two songs to the Internet for friends around the world. “Before we knew it, someone told us that our song [Chup] was playing in the local radio stations,” says Bangash.

While Paimana Bitte receives enormous feedback from Pathans who ask them to keep the Pathan folk-song tradition alive, Zeb and Haniya’s impact is felt nationwide—far beyond the Pathan community.

All the other songs on their album are in Urdu, Pakistan’s national language, and their lyrics appeal to urban youth. For example:

All this listening, my patience, is exhausted

We have talked a lot, now it is time for love

You should know what is in my heart

This longing, this sweet longing, what is it?

This refrain resonates with Pakistanis who find it difficult to date or even meet in public in this conservative society. 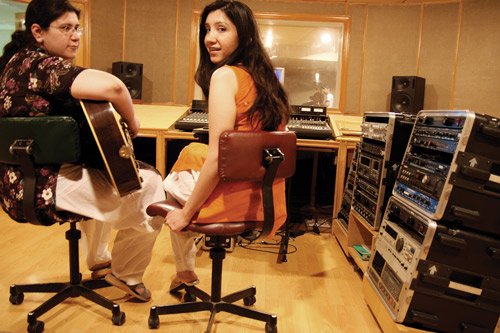 In Pathan culture musicians may be repressed, but Pakistan’s mainstream is hungry for music. After launching their album in July 2008, the cousins toured the country for three months, performing weekends at a multitude of new venues, including at a puppet museum and on television talk shows. They are also expected to sign a distribution deal with a label in India, and to tour the US, UK, and Canada this August.

The press is particularly excited that, unlike other Pakistani singers, the cousins are fiercely independent. One example: dress. Other stars in their position wear Western-style jeans and tops. Zeb and Haniya perform in casual Pakistani attire, loose-fitting pajama pants and long shirts called kurtas.

“The way they came on stage spoke volumes about their confidence,” wrote a reviewer in Instep magazine about a recent concert. “Dressed simply in pants and plain kurtas … they looked dramatic on stage. Zeb and Haniya are not pop tarts, and they don’t need designer wear to boost their profile. Theirs is a music that speaks for itself.”

And it speaks to the young. A thirteen-year-old niece of mine saw the video of their song Aitebar (Trust), which is simply filmed with two dancers floating around in a dimly lit old house. It was, she said, “magical.” That is the same word Bangash uses to describe the evening she discovered the abandoned café in Wilder Hall basement, when she and Aslam first played together.

Abid Shah is a freelance writer based in Lahore, Pakistan. This article appeared in the winter 2009 issue of the Alumnae Quarterly.

To hear the magic yourself at Zeb and Haniya’s Web site.

3 responses to “Music That Speaks for Itself: Zeb Bangash ’04 Is Half of Pakistan’s Hottest Pop Duo”