My Voice: Aysha Baqir ’95 on #MeToo and the Asian Woman

“I never told anyone.”

My throat tightened as I gazed at the circle of motionless figures seated around the veined marble tabletop. Five minutes ago, my host’s black-and-white dining room had resonated with a powerful discussion of “Beyond the Fields” — my novel about Zara, a young village girl who embarks on a harrowing quest for justice for her twin. It’s a tale of rape, resilience and reclaiming honor based on the more than 15 years I spent working with village women in South Punjab, Pakistan.

Now the room was silent. Painful. Pounding. Fingers motionless, and platters of samosas, spring rolls and mango sago were suddenly forgotten. But our eyes met. Challenged.

“What was the point in telling anyone,” a voice murmured from my right. Heads nodded. Others sighed. In a few minutes, chatter picked up again, although a shade more somber, and a pitch lower.

I pushed the fine bone china plate away. I wasn’t prepared for this, but I should have been. According to the World Health Organization (WHO), as I knew from my research for the book, nearly one in every three women worldwide has been physically or sexually abused by their partner or experienced non-partner sexual violence.

Wait. These women weren’t only from Pakistan. The back of my neck prickled. I could trace an arc from India to Japan. All were expats belonging to many diverse cultures and continents of Asia. They had never spoken out before? Why not?

The thought clawed at me over the following days. Asia was home to such a large percentage of the world’s female population. How many of those women had spoken out against rape and sexual abuse during the earlier days of the #MeToo movement? It wouldn’t have been easy. In many Asian communities, I knew, patriarchal laws and norms prioritized family honor over individual wellbeing and viewed rape as a violation of morality rather than a crime. Why would a survivor risk speaking out or joining the movement if she feared being blamed and shamed by her own family and community?

And if a girl or woman did rebel against her family to demand support, action or justice, how would she do it and what would she gain? Millions of girls and women across Asia still lack access to a phone, the Internet and the know-how to set up social media accounts. More importantly, if a survivor did join the movement, would she get the justice she deserved? I knew of few Asian women who had joined social media to report rape or sexual harassment who had gotten justice, and then only after a long and painful public struggle.

The majority of girls and women were instead struck with barbs.

“Did anyone see you struggle?”

“Think of your children. Do you want to dishonor the family name and send their father to jail?”

“He is your husband. You must obey him and do as he says.”

Weeks have passed since that evening, and as “Beyond the Fields” continues its journey across the world, Zara’s quest for justice will tug and jab at long-hidden memories and pull at readers to question how much has really changed for girls and women across cultures and continents despite the #MeToo aftermath.

What I know for certain now is that nothing will change if we don’t continue to talk to each other. We must challenge the unjust mindsets and keep talking — and reading and writing — until we create the change we owe to girls and women across the world. 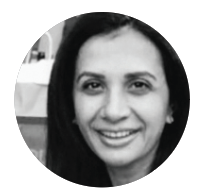 Aysha Baqir ’95 is the founder of Kaarvan Crafts Foundation, a Pakistan-based pioneering economic development nonprofit focused on poverty alleviation through the provision of business development and market-focused trainings for girls and women. She is working on her second novel. Learn more at ayshabaqir.com.

This article appeared in the fall 2019 issue of the Alumnae Quarterly.