Nissreen Haram ’86: Learning to Play and Playing to Learn 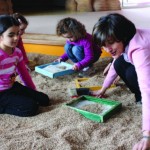 Nissreen helps kids dig for history in the museum’s ancient civilization section. They find “artifacts” such as coins and pottery.

Nissreen Haram knows her work is successful when children start screaming—screaming because they enjoy the museum she directs so much they don’t want to leave.

Since 2008, Nissreen has guided the Children’s Museum in Amman, Jordan. A visit to the nonprofit’s Web site (www.cmj.jo) shows both the museum’s playful approach to learning and its panoply of kid-centered offerings.

Visitors can milk a virtual cow, record a TV broadcast, stage a puppet show, rebuild a dinosaur, make a rainbow, or take a walk on the moon. More than 150 interactive exhibits teach about humankind, technology, and the natural world.

The whole operation is a learning initiative of Her Majesty Queen Rania al-Abdallah, with offerings designed for the nearly 40 percent of Jordan’s population that is aged fourteen and under. Nissreen’s own offspring are thirteen and fifteen, and remain “the museum’s biggest fans, are very involved as advisers and critics, and occasionally volunteer to help with big events.”

Nissreen’s planning and managerial experience, gained as manager of a large law firm, has helped the children’s museum become one of the country’s favorite destinations for families and kids. Some 400,000 people have visited since the museum’s 2007 opening.

What do kids like most? Although “button-pushing and fancy gadgets have first-time appeal,” Nissreen says children prefer things they can maneuver with their hands, repeatedly. “I am always surprised at how much they explore and re-explore the same exhibit; it’s like hearing a story again and again.”

Nissreen’s goal is to help kids “rediscover the magic in this world and the pleasure of learning that is all around, not only in schools or fancy museums.” And she says this work gives her “the refreshing chance to rediscover the familiar, which you can only do when you work with children.”—E.H.W.