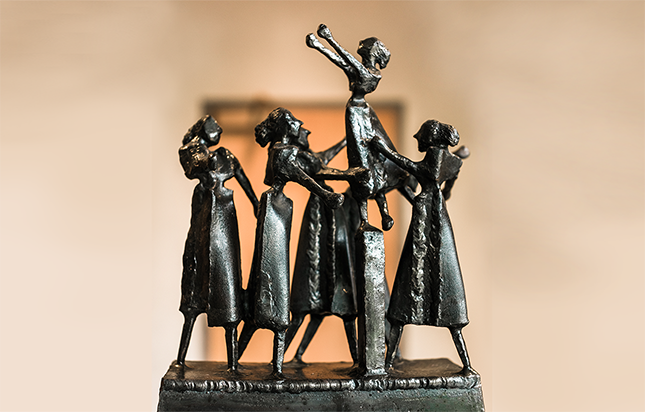 In May 2015, during their fiftieth reunion weekend, about sixty members and friends of the class of 1965 gathered in Abbey Hall living room to dedicate a sculpture to classmate Denise Thompson Smith ’65, who passed away in 2010.

A close-knit group of classmates, who call themselves the “Porter People” and have kept in touch through informal newsletters since their senior year at Mount Holyoke, worked together to identify a fitting tribute to the first of their own to die.

Together they purchased a steel sculpture by longtime Mount Holyoke art professor Leonard DeLonga, who began at the College when the friends were students and with whom many formed close friendships. The piece was sold to the group by DeLonga’s widow, Sandy, from her personal collection and shows a group of dancers holding another above their heads.

“We see it as her friends lifting her up to heaven,” says Di Howland McIntyre ’65, one of the Porter People.

The sculpture is now on permanent display in the lobby of Kendall Sports and Dance Complex. “Denise was student president of the MHC Dance Club, and she never saw the new dance studios,” says McIntyre, “but it’s very fitting that she will always have a place there now.”

6 responses to “On Display: Forever Dancing”