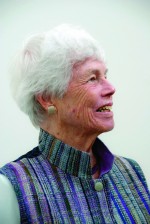 Weavers, ceramicists, woodworkers, furniture-makers, sculptors, quilters. As co-chair of the Fuller Craft Museum‘s overseers, Patricia Peck Warner ’48 has an acute knowledge of and keen advocacy for the work of the artisans exhibited at this nationally renowned venue for contemporary crafts in Brockton, Massachusetts.

With over twenty volunteer overseers at Fuller, there is no lack of ideas to generate visitor interest and, hopefully, membership—an important source of museum revenue. Warner explains that the overseer role is vital in engaging visitors in the artistic world of innovative craftsmanship.

Outreach is often tapped through a local traditional craftsmanship institute, Boston’s North Bennet Street School—a copious resource of artisan faculty and graduates who occasionally offer workshops and demonstrations at Fuller. To illustrate this, Warner names a piano conservation demonstration in September that offered viewers the opportunity to view the artistry and technical detail involved in piano tuning. And for all workshop participants,  the Fuller’s craft exhibits are mere steps away. It is with continued outreach and exemplary craft displays that potential museum memberships are fostered.

With volunteer experience in both public television and Boston’s Museum of Fine Arts, Warner’s enthusiasm has served the Fuller in good stead. Her reorganization of the overseers’ program has used the museum docents’ deep knowledge of contemporary craft to raise awareness about the museum.

And Warner’s special connection to contemporary crafts? For her, “appreciating the work is the most important part—not doing it.” It is clear that Warner has a sincere love for the craft-making community. Citing her distinct preference for the personal relationship between a craft’s creator and the eventual owner, Warner said, “I have yet to meet a craftsperson who isn’t a genuinely nice person.”