Sally Mangum ’82: Calligrapher by Appointment to H.M. the Queen 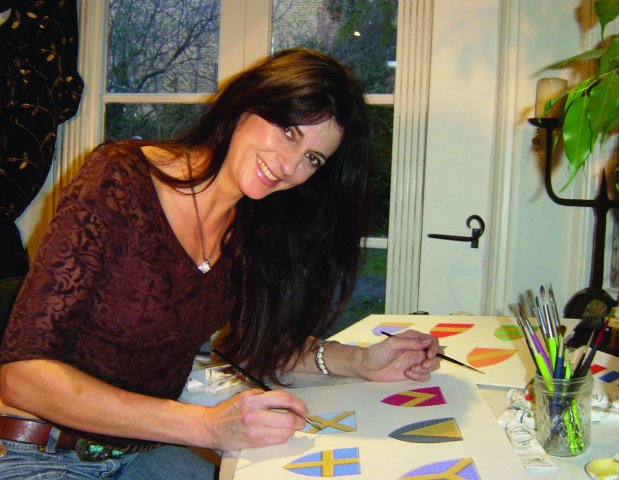 Calligrapher Sally Mangum has a way with words—she makes them beautiful, and surrounds the letter forms with richly colored designs. And she does this for some of the most prestigious customers in the world, including the British Lord Chamberlain’s office.

As holder of a “royal warrant” for calligraphy, Sally displays the royal coat of arms on her business cards and letterhead. But she doesn’t advertise, as referrals bring her business.

“My work consists of a wide range of commissions including invitations, letterhead, diplomas, menus, and monograms for stationers and corporate and private clients,” she says. “I also take on illustration and heraldic commissions.” Those range from drawing pen-and-ink family crests to an illuminated scroll listing all the chaplains at the Tower of London since the fourteenth century.

Sally started fourteen years ago as a freelance calligrapher, after only one term of evening classes in the art form. Her interest in heraldry was sparked by a chance find at a flea market. “A few years ago while browsing through the book stalls at Portobello Market, I picked up a well-worn book on heraldry,” she recalls. “A mass of old letters and colorful sketches of shields and lions tumbled out from the pages and into my hands. In that very instant I knew it was a direction I wanted to follow.”

Since then she’s been studying techniques that date back to medieval times, grinding her own ink on a stone, stretching vellum (calfskin, used instead of paper), mixing special colors, and using gold leaf and gesso for traditional raised illumination.

In 2007 she was awarded a prestigious Queen Elizabeth Scholarship to study heraldic art at Reigate School of Art and Design, where she continues her studies.

Despite all the accolades, Sally doesn’t consider herself an expert. But she’s getting there, one extraordinary letter at a time.

Read More about Sally’s art at:

2 responses to “Sally Mangum ’82: Calligrapher by Appointment to H.M. the Queen”