On Being the First Family Member to Attend College

Katie Pierce’s mother couldn’t understand why her daughter wanted to go to college instead of developing a talent she identified in high school for doing her friends’ hair. Alyssa Nelson ’11 and her mother both wept for an hour on freshman drop-off day when it came time to part. Miriam Chirico ’91 never skipped a class during her college career, being acutely aware that each session cost between $40 and $60. Brenda Hernandez ’04 worked thirty-five hours a week in retail at the Holyoke mall during her first two years of college. During her first semester on the Mount Holyoke campus, Zaida Cutler FP’11 had a recurring sensation that at any time someone would tap her on the shoulder and tell her she didn’t belong.

Being part of the first generation in your family to attend college can be as fraught with challenges as it is rich with opportunities, as is borne out by the stories of some alumnae and current Mount Holyoke women. According to Alison Donta-Venman, Mount Holyoke’s director of institutional research, a spring 2009 survey revealed that almost 15 percent of the women at the college come from families where neither parent has a bachelor’s degree. Nationally, about a third of all college students are among the first generation in their families to access higher education, according to numbers compiled by the National Center for Educational Statistics, which is part of the US Department of Education. About a quarter of students seeking a four-year degree fit that category.

Becky Wai-Ling Packard, MHC associate professor of psychology and education, studies the implications of being the first in your family to enter the world of higher education. She also has stories to tell from personal experience. Researchers often see a degree of ambivalence among first-generation college students, according to Packard. “You are trying to strive and everybody understands that’s a good thing,” said Packard, but there are many ways first-generation students hold themselves back, sometimes to the point of unknowingly sabotaging their progress. It’s not uncommon to feel either inadequate or like a social climber who is rejecting her past. Questions like these—Is where I am coming from not good enough? Do I think I’m better than other people because I’m getting this education? Will I even understand where I come from after college? and Why am I sitting here pontificating about sociology while my mother is mopping floors?—can subtly eat at working-class students in elite institutions.

Packard also notices that first-generation students often exhibit an urgency to become overly involved in community service as a way of “giving back,” because sitting in the library and reading seems like a luxury that they and the world can’t afford. 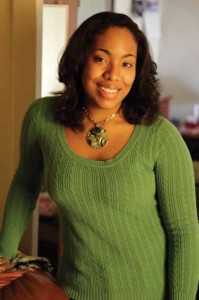 Alyssa Nelson ’11 is fulfilling the educational dreams of her mother (a high school graduate) and grandmother (whose formal education ended after second grade).

Alyssa Nelson, a junior majoring in sociology, grew up in New York City. Her grandmother, who came from Puerto Rico, has a second-grade education and can’t read or write. Her mother graduated from high school and yearned to go to college, but simply couldn’t afford to. So she is determined that her children fulfill that dream. Yet, when Nelson was accepted at Mount Holyoke, her mother “started crying months in advance, asking, ‘Are you sure you want to go so far away?’” recalls Nelson. She now aims to be accepted by Harvard Law School in her quest to become a criminal-defense attorney. At the same time, she is getting her teacher’s licensure. “It’s always good to have a backup plan, in case I don’t do well in the field of law, or I don’t like it, or something happens where it doesn’t work,” said Nelson. In addition to her studies she volunteers at a criminal-detention center in Westfield and works long hours at multiple jobs to make money on her vacations and through work study on campus.

Miriam Chirico ’91 is a professor of English at Eastern Connecticut State University. Her parents came to the United States from Italy and France respectively. “They really wanted me to go to community college if I was going to go to college,” she said. A telling moment was when, on a visit to the MHC campus, her mother, commenting on some women playing lacrosse, said, “You’re really at the wrong school.” Chirico said the remark stemmed from the fact that “the game has such a prep-school look to it, with the plaid skirts and the ponytails.” Her mother’s message was that such pursuits were “beyond my economic level,” Chirico said.

Her response to the opportunities presented at Mount Holyoke was to single-mindedly devote herself to academics, in part because her parents took out a second mortgage on their house to make it happen. She takes pride in having graduated fifth in her class, but in retrospect wishes she’d had a more relaxed attitude toward school. “I could have left campus more often to go on road trips, because that was all part of the college experience,” she said. 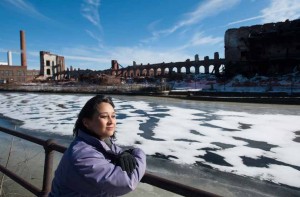 Zaida Cutler FP’11 and her parents worked in paper mills along this canal in Hoyoke, Massachusetts.

Zaida Cutler ’11, a Frances Perkins student who wants to major in English, remembers impressions of Mount Holyoke College from her youth. “I lived in Holyoke all my life. I would drive by the place on Route 116 and look at those gates and say, ‘Oh my God, that is a whole other world. I’m not invited.’” After she was accepted, her first response was to recoil at the risk that going to school represented for her, and she contemplated dropping out almost as soon as she started. A voice inside her head kept asking, “What have I done to myself? Why am I here? Am I wasting time and money?”

Cutler’s deepest fear—“When are they going to figure out that I’m really not supposed to be here?” with her through the entire first semester.

Cutler’s father, who died when she was a baby, was from Puerto Rico, and her mother was the daughter of Italian immigrants. They both worked in paper mills, and Cutler remembers her mother’s distinct unease about Cutler’s early foray into higher education. Mostly an A student in high school, she was accepted at the University of Massachusetts at Amherst. She dropped out after two months, in part because of her mother’s misgivings. “What’s it going to do for you? was her way of thinking,” Cutler recalls. Her mother would tell her, “You’re already smart and you can do anything those college girls can do. After four years of college you will still have to get a job, and who is going to pay for that?”

Cutler went to work as a receptionist in a paper mill and was promoted to the accounts department, where it became clear to her that the industry was in decline. After a string of poorly paid jobs, she went to Holyoke Community College, where she got a degree in management in 1997, enabling her to get her current job as a medical records coordinator in a nursing home.

Now, as a Mount Holyoke student, she is realizing that she loves literature and poetry. Even though Cutler hopes to major in English, she is setting her sights on becoming an accountant. “That’s a tradeoff I’m happy to make because I think I will enjoy accountancy just as much as anything else I could do to pay the mortgage,” she said.

She is struck that, because of her economic circumstances, she doesn’t feel as free to follow her bliss. “I’ve met young ladies who are religion majors, and I think to myself, isn’t that nice to be able to do that, but good luck buying a house with that,” said Cutler. “I would love to go for my MFA, but then what, and how do I pay off the student loan? So I have to be practical.” 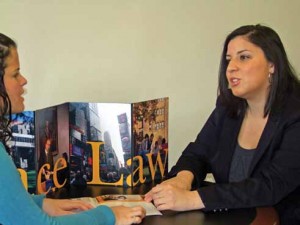 Now an admissions counselor at Pace Law School, Brenda Hernandez ’04 (right) talks to prospective students about her experiences as a first-generation college student, encouraging them to struggle through the many obstacles to success

Brenda Hernandez ’04 found being a first-generation college student a liberating experience. The oldest of five children growing up in Northampton, she was fourteen when her father died, putting her into the role of second parent to her siblings. She worked at McDonald’s and then at a pharmacy all through high school. She also knew that she loved to learn. Hernandez applied to Mount Holyoke early decision and nowhere else. Once in college, she felt good that she got less pressure from home than some of her classmates. “A lot of students whose parents had been through it really pushed them to say, ‘okay, this is the plan for you.’ I had no one saying that. So I could really go in there and just explore,” said Hernandez. “My mom was definitely 100 percent there for me. I could have gotten Ds and just the fact that I was in college made her so happy. For me to be doing well was a bonus.”

Hernandez recently graduated from Pace Law School and now works as an admissions counselor there. She often talks to prospective students about experiences as a first-generation college student, encouraging them to struggle through the many obstacles to success.

The experiences of Katie Pierce ’03 were more typical of what the academic literature describes as issues that first-generation college students face. Her mother was “confused” by her decision to pursue higher education. “That divide pulled us apart during my initial college years,” she said. 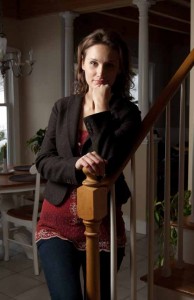 Katie Pierce ’03 found her mom was “confused” by her daughter’s decision to attend college, since Pierce’s early talent promised a successful career in hairdressing.

“My mom wanted me to become a hairdresser; she didn’t understand why I wanted to go to college.” Pierce majored in economics and, until the recession, worked in the investment-management industry for a Boston financial firm.

In retrospect, Pierce wishes she had been less focused on a major she thought would guarantee her a job right out of school. “I’m realizing that I spent much of my college years suppressing my creative side. That keeps bubbling up, and every now and then I feel like I should have done something more creative,” she said. Art and anthropology fascinated her during college. “It was difficult to ignore the spark I felt in those types of classes, but my economic situation kept telling me to focus on things more practical.”

Pierce, who serves as copresident of the Mount Holyoke Club of Boston, said she remembers feeling embarrassed by her working-class roots during college. “It’s definitely taken some growing up and me getting older to realize that it’s nothing that I should be ashamed of,” she said, “It’s what molded me and made me who I am today.”

Professor Packard, whose research on mentoring and persistence is supported by the National Science Foundation, said administrators across the country are focusing on applicants who are the first in their families to attend college “as part of a broader interest in attracting and retaining a diverse pool of students.” The overwhelming majority of people from lower-income backgrounds seeking higher education “use a community-college pathway,” she said.

Mount Holyoke, Packard observes, has a history of attracting students from a wide range of socioeconomic backgrounds. “I think it’s partly the Mary Lyon legacy of purposeful engagement and community service,” she said. “That is very attractive to people from first-generation college backgrounds because, if their entire family is making a sacrifice for them to go, then they want to do something very meaningful with that education.”