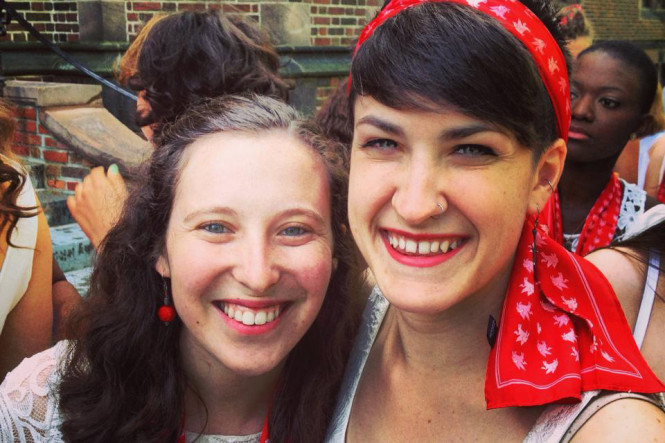 In the fall of 2010, Hannah Barg ’14 (left) had just returned to the US from Israel, where she had spent her gap year the year between high school and college. She was worried about being able to connect with other first years, the majority of whom had spent the past year in American high schools. But when she met Leah Hammond (right) during orientation, she noticed Leah was wearing a Hamsa necklace similar to her own. By the end of their conversation, which started on the bridge near Prospect, Hannah discovered that Leah had also recently been to Israel. This was the first of many experiences they bonded over as their friendship grew during their first year and every year after. Hannah, an anthropology major, is from St. Louis, Missouri. Leah is from Boulder, Colorado, and self-designed a major in oppression and resistance studies.

This past April, with graduation fast approaching and their time on campus coming to a close, these two friends sat down in the Rockies, their senior-year dorm, to reflect on their time at Mount Holyoke. Here are three stories they remembered:

“What am I doing at this college that is basically summer camp?”

“We should probably talk about our legacy.”

Hannah and Leah remember the time they threw a frat party with a Mount Holyoke flair.

Music Info: “get out” by Jahzzar and “Everybody Say” by Takka Takka
» Read the transcript.

“By the time I’d come back, a tree had fallen into Wilder.”

Hannah and Leah recount the ways campus changed during “Snowpocalypse,” the 2011 Halloween Nor’easter that swept through South Hadley.

» Read more about Commencement 2014 in the Alumnae Quarterly article, “Congratulations, Class of 2014.”