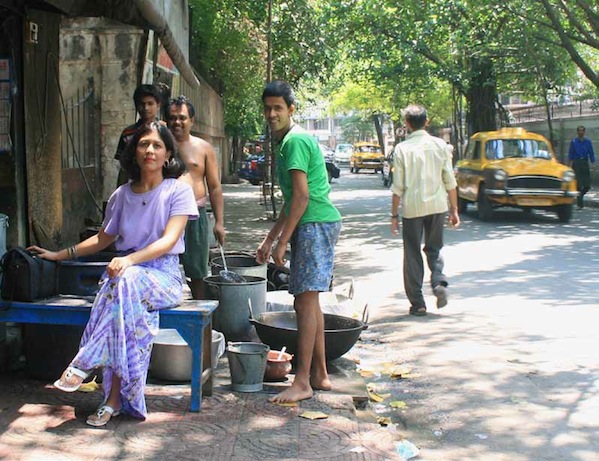 As Rita Banerji knows all too well, just being female in a public place is enough to draw stares in India.

Culture shock—that disorienting feeling that’s common while adjusting to another country—is a challenging but expected part of settling into a new society. What happens, though, when an international student returns home after Mount Holyoke? After adapting to a foreign culture, going home again should feel like slipping into comfortable old clothes, right?

But when several international alumnae wrote us independently about experiencing “reverse culture shock” after MHC, the Quarterly invited them to share their experiences making the transition. The essays begin here and continue online.

Where Are All the Women?

It was one of the first things that struck me as extremely bizarre when I returned to India. Everywhere I went—government offices, banks, the marketplace, the post office—more than 80 percent of the people present were men!

In retrospect, I wonder at my own amazement. After all, I grew up in India and am familiar with this erratic spatial pattern of gender distribution. The tacit logic here is that the domestic realm is the woman’s place, and the “outside” space is the male domain. And even for women who want to buy their own stamps and queue up to pay their own phone and electricity bills, the overwhelming, almost aggressive male presence can be inhibiting.

If there are women in these public spaces, they are more likely to be from the poorer sections of society. For the higher-income, educated classes, it is considered almost an act of vulgarity for women to walk into these places. So, a woman with a management job might drive to work at her fancy office downtown, but she would never walk into the electricity office to pay her own bill. (She would send her husband, father, or domestic help.) I understand this perfectly, and yet I was surprised. It was only later that I understood why.

When I first went to Mount Holyoke, I sent a letter to a friend in India saying, “I feel so free! I can wear anything. And I can go anywhere—alone!” As a teenager in India, I went places only in pairs or in a group. Walking down the main street of town, as a young girl in India, is like walking through a war zone, with your defenses up, always expecting an attack. There is no telling when there will be lewd remarks or when you’ll be groped or followed. This power dynamic is how boys and men reinforce their dominance over space in India. We girls grew up like hedgehogs, always curled into our protective balls, occupying the least amount of space possible.

When I returned, my expectations had changed. Simply put, I now expect women in India to occupy public space with the same freedom and nonchalance as men!

Moreover, my response to gender dynamics has changed. The territorial male responses don’t frighten me anymore; they infuriate me! I don’t cringe the way I once did—and the way I still witness other women doing. Something in me almost compulsively pushes back, and I stand my ground.

I remember an incident in the post office, when I was the only woman in a thirty-person queue. A man came and stood behind me, and even though there was plenty of space, he stood close enough to attempt periodic body contact with me. (This is a very frequent occurrence for women in India.) I swung around and told him to please move back and not touch me. He said, with a tone of aggression men often use in public space, “Why? Do you own this post office?” So I told him in a loud and firm voice, “No I don’t own it, and neither do you. It is a government office for all citizens to use. I am treating you in a civilized manner, and I expect you to do the same.” None of the other men in the post office said a word. The message was: “You don’t belong here. You deserve what you get.”

Most importantly, my perception and expression of my “self” as a woman have changed. Femininity in India is a sternly tailored costume that every girl and woman is expected to assume. It tells you what to wear, what to think, what to do, and who to be. There is a prototype ideal “Indian woman,” and any deviation is harshly judged.

Growing up, I too unquestioningly wore the “Indian girl” costume. There was a given way to be, and I don’t remember ever challenging that as a girl. But going from my late teens into adulthood in the United States, I got initiated into a different concept of being a woman. It was not something given to me to wear or assume; it was simply who I was. My femininity is how I evolve as an individual, the process of growing into my own skin. And I am free to experiment and change. I don’t have to explain, justify, or defend it. I am allowed to be confused, and I am free to surprise myself by discovering that part of my womanhood I never knew existed.

Rita Banerji is a writer, photographer, and gender activist. She is also founder and chief administrator of the 50 Million Missing Campaign (50millionmissing.info), which raises awareness about and fights female genocide in India. This article appeared in the summer 2011 issue of the Alumnae Quarterly.

Reverse-culture-shock stories from more international alumnae continue online at alumnae.mtholyoke.edu/cultureshock.
• Eleanor Choo ’06 fought a “battle of wills” with her homeland, Malaysia. Find out who won.
• Gianna Reyes Montinola ’80 found it hard to curb her tongue to let others “save face” after returning to the Philippines.
• Marie-Hélène Taverne-Jacquet CG ’67 found she had changed at MHC but her family and friends in France hadn’t.
• Long Truong ’10 returned briefly to her native Vietnam and missed the critical-thought process common at MHC. Her innovative solution may surprise you.
• Liz Pitman Small CG ’84 returned to “the small intensity” of Scotland more focused on a career than
her UK peers.
• Gigja Fridgeirsdottir CG ’63 was glad to get back to Iceland, where “in some ways women are more independent than in the United States.”