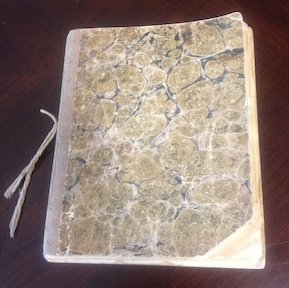 Myra Freeman Ziegler ’68 has donated to the College a workbook used by her great-great-grandmother, Martha A. Leach, who was in Mount Holyoke Seminary’s first graduating class. The workbook’s first page is dated January 1838.

In elegant handwriting, Leach copied quotes from famous writers, including Byron, Coleridge, Longfellow, Shelley, and Shakespeare. One unattributed quotation–apparently adapted from Shakespeare–reads, “I have been to a feast of poetry and stolen all of the scraps.” 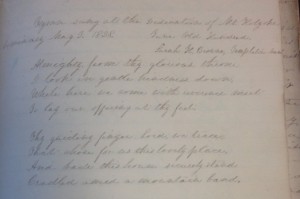 She also has recorded items such as the words to a hymn sung at the dedication of Mount Holyoke Seminary on May 3, 1838.  The song concludes with these prophetic lines:

Rich blessings to receive and give

A beaconing star, to lead the way

Down to your bright millennial day.

The Office of Advancement, which received the donation, will give the workbook to the College’s archives.