Takin’ It to the Streets, a conversation with political activist Liz Roberts ’91 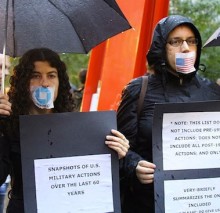 Liz Roberts ’91 (left)
at an action organized by the War Resisters League during Occupy Wall Street.
Photo by Sabelo Narasimhan

What is the War Resisters League, and what projects are you working now?

It was founded in 1923 by women suffragists and conscientious objectors from World War I. My role as development and membership coordinator is to interpret to members, donors, and funders our antimilitarism campaigns and projects. For decades, we have provided training in nonviolence and direct action. Currently, we are focusing on the growing militarization of police. In addition to coordinating grassroots fundraising, I offer guidance in organizational development and strategic planning.

Who or what inspired you to become an activist?

I always knew that I wanted to work for change. But it was at Mount Holyoke, taking classes with Professor Jean Grossholtz, that I began to really understand that it’s everyday people, not charismatic leaders, who make change. Jean’s lifelong activism and her encouragement were pivotal in my decision to become an activist.

Beyond making donations, how can the average person help with positive change?

When we think about having a planet left for our children, “sitting in” or being held at a local precinct for a few hours should seem like a very small inconvenience. There is great honor in risking arrest for a moral reason. When Henry David Thoreau was jailed overnight for refusing to pay war taxes, Ralph Waldo Emerson asked, “Henry, what are you doing in there?” Thoreau answered, “Waldo, the question is: what are you doing out there?”

I believe activism is the most powerful antidote to despair and alienation. Many feel that they couldn’t possibly have an effect on the world, but there is an African proverb to dispel this notion: “If you think you’re too small to make a difference, then you’ve obviously never been in bed with a mosquito.”

One response to “Takin’ It to the Streets, a conversation with political activist Liz Roberts ’91”