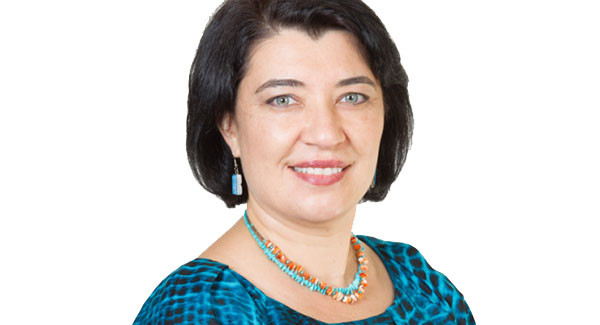 This past March, Naomi Barry-Pérez ’96 met with Mount Holyoke students in Washington, DC, for the “MHC Lynk: On the Road” networking program. Barry-Pérez chatted with current students and gave the keynote speech titled, “Women in Public Service: Engage, Connect, Step Up.” A politics major at Mount Holyoke, Barry-Pérez has worked at the Department of Labor (DOL) since she received her master’s in public administration in 1998. Now, she is the director of the Civil Rights Center at the DOL.

What do you do on a typical day at work?
I prepped for today after putting my son to bed last night. I reviewed President Obama’s executive actions to promote the realization of equal pay for women. I refreshed my memory on the organization that I would be addressing in the morning.

At about 8:30 a.m., I squeezed into the office to pass along a few work products so that others could revise, finalize, etc., in my absence. Then I walked to the Capitol Visitor’s Center to follow Senator Bob Casey and moderate a panel on gender equity in education and the workplace on behalf of the National Alliance of Partnerships in Equity (NAPE).

I left after my panel and caught up on some pressing administrative matters. I met with staff to ensure that our strategic plan and goals were being managed. I then reviewed a guidance document on promoting the hiring of individuals with disabilities.

I began to think of my presentation the next day to Human Resources Officers in which I would review their role in ensuring equal employment opportunity. I left strictly at 5:00 p.m. to pick up my son, something that I am anxious to do every day.

Is your current job what you thought you’d be doing when you were younger?
I did have dreams of Broadway! Other than that, yes, it is. I’m a bit sentimental, and I still have my admissions essay for Mount Holyoke. I found it recently and was taken aback at how similar it was to other essays or speeches that I’ve given over the years. I expected to work more on the front lines with folks but, in Washington, DC, I don’t often get to serve alongside the people that I aim to assist. I try to connect by actively volunteering in the local community.

What did you learn at Mount Holyoke that helped you get where you are now?
I learned self-respect. I learned to listen more, ask good questions, and accept that I can’t and shouldn’t want to go it alone. I learned that diversity fuels innovation. I learned about community.

What is the most challenging part of your job?
Accepting that change takes time. Change in civil rights policy often means change in culture. That’s hard to accomplish… for some fair and good reasons.

Do you have any pointers for students who would like to work for the government or go into politics?
Intern or work for Congress, even if for just a short stint. It’s such a special culture, and you’ll gain an appreciation (not necessarily a favorable appreciation) of political compromise or lack thereof. Work for a member of Congress who emphasizes constituent services so that you regularly, constructively interact with constituents and other stakeholders who offer genuine reflections on their needs, interests, and experiences. You’ll learn that you don’t have all the answers; that you learn from listening; that representation is a privilege; and that people want government to work to enhance their communities.