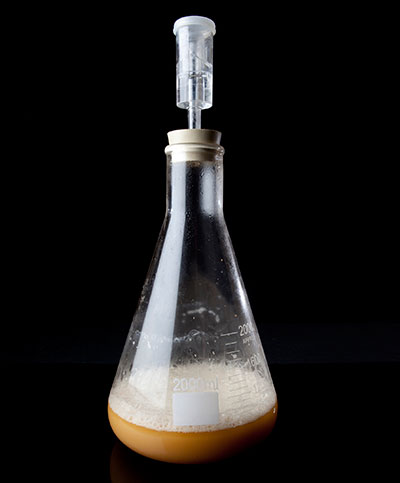 In the spring of 1972, students in Microbiology 301 were studying the process of fermentation when their professor was struck with an idea: Why not make beer to get a better understanding of the process in action? Although Mount Holyoke resided in a dry county and most in the class were under the legal drinking age of twenty-one, the professor placed orders for hops, malt, and other necessary ingredients.

Glass quart Coca-Cola bottles with screw tops had just been released onto the market, and students were asked to bring in two per person. The class properly cleaned and sterilized the bottles before inserting tube goosenecks into the top of each. Students were then partnered off, and each team was responsible for a different part of the process.

Nancy Drake ’73 and her partner were in charge of decanting the beer, leaving the sludge behind, and then adding a little more sugar. After performing their duties they capped the bottles and left them under a bench in the Clapp lab, where they were to stay for a week before being moved by the last two lab partners to a cold, dark room.

A little over a week later, about a dozen professors were assembled in Hooker Auditorium for a faculty meeting, when forty-eight bottles of home-brewed beer exploded, blowing out seven windows and resulting in a visit from the South Hadley Bomb Squad.

Drake and her classmates didn’t hear about the incident until the next morning, when they walked into what smelled like a “bad frat party” and saw their professor with a long look on her face. Drake, who had given her father two bottles of the beer to take home the previous week, sat through class anxiously before rushing back to her dorm to make a collect phone call to her father. Luckily, he had refrigerated the bottles, but years later he confessed the beer was the worst he’d ever had.

2 responses to “A Brewery Blowup”