Three Mount Holyoke alumnae find each other on a cruise ship 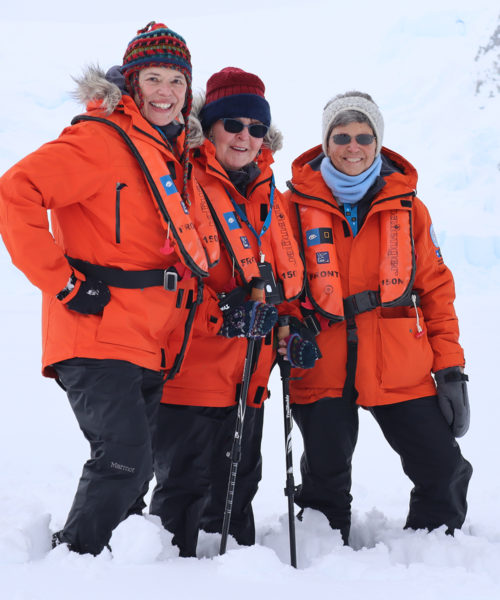 Uncommon women go to the ends of the earth to find each other, but find each other they do. In November Kathryn Willmore ’65, Cyndy Rapp Curry ’63 and Lorain Heindel Giles ’73 (pictured, left to right) embarked on an Antarctic voyage with National Geographic- Lindblad Expeditions. They soon discovered their “uncommon” connection when Willmore mentioned during a dinner conversation that she had received a very good liberal arts education, and Curry asked if she had gone to Mount Holyoke. Just like that. Taking a look at the passenger manifest (which showed 96 passengers from eight countries), the two saw that Giles lived in South Hadley, and some sleuthing revealed that she, too, is an alumna.

The new friends spent days and nights (almost 23 hours of daylight) exploring and learning about the history and science associated with this astonishingly beautiful part of the planet. Shore excursions included climbing up and sliding down glaciers, penguin encounters by the thousands, cross-country skiing and visiting Port Lockroy, an historic whaling and British military base now housing a small museum and the most southerly operational post office in the world.

And, of course, there were icebergs: huge enough to force the ship to turn back in a narrow channel or small enough to kayak among — and in every shade of blue from pale to deep to brilliant turquoise, exquisitely sculpted by the wind, water and sun.

A highlight of the trip was traveling farther south in the Weddell Sea than the ship had ever been. This is where Ernest Shackleton’s ill-fated ship Endurance was trapped and crushed in the pack ice in 1915. There, right up close, to everyone’s delight, was the rare sight of Emperor penguins.

Unlike the early age of Antarctic exploration, which was completely and deliberately dominated by men, several of the ship’s Lindblad crew and National Geographic scientific staff were women, including the ship’s second-in-command, as well as four naturalists, two of whom were the expedition divers. Of getting to know each other, Giles said, “It was amazing to discover how much we had in common despite our different graduation years and divergent life paths.”

Certainly the trip of a lifetime, made all the better in the company of uncommon women.

This article appeared as “Cruise connection” in the winter 2019 issue of the Alumnae Quarterly.