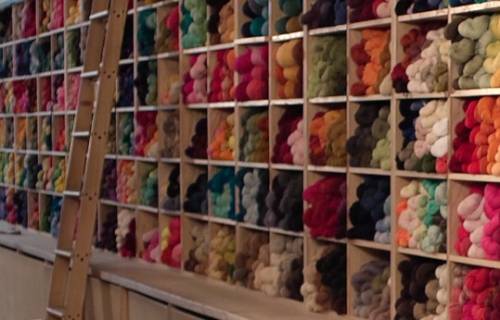 Often I’ve slipped back in memory to an anthropology class, Marriage and the Family, in the fall of my junior year. I sit at the end of the second row, knitting maroon wool into a sweater for my boyfriend, while up front Mr. Lobb explains how anthropologists compare cultures. In this course and many others, we are allowed, even encouraged, to knit. Learning, the theory goes, involves listening and thinking. Class discussion will illuminate material we’ve already read, while we consider concepts and, occasionally, when an idea clicks, jot something down. Today we’re covering where couples live after marriage. Matrilocal—I try to imagine newlyweds fitting in my mother’s house. Or—patrilocal—joining my future husband’s father’s family. I deliberately don’t picture my boyfriend, known to all as Turtle. I’m happy we’ve lasted six months, but don’t want pressure. And must I really get married to live with someone neolocally, in a new place? In 1970, many of us question the roles and rules of marriage and family, though we have no idea how contested they will be, for how long. I twist in my seat and scan the room. Many knit, some crochet. One girl is knotting a macramé project fastened to the far wall, while in the back another has set up a smallish loom. Someone could study us, I think, as a matriarchal tribe whose founder’s grave is in the center of our village. I make a note. 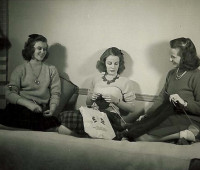 Pockets of women are curled up in upholstered chairs and sprawled out on the floor. They’ve come to knit.
Web exclusive

Did that thought fix the moment in my mind forever? My grandmother taught me to knit. When I got to South Hadley, I visited The Yarn Shop (“The most beautiful yarns from all over the world,” proclaimed their ad in my freshman handbook), where I bought a skein from which I whipped up the first of many watch caps for my relatives. Was it desire to make a Christmas gift for Turtle or knitterly ambition that led me to attempt my first sweater? Wanting to try working with two colors, I adapted a men’s ski pullover with snowflakes up the sleeves. Only if you looked closely could you tell (maybe) that my white “snowflakes” were turtles.

Turtle and I broke up in our senior year. The sweater had nothing to do with it.

Only much later did I hear of the “boyfriend sweater curse,” the notion that making a sweater might mean doom. Or could it just be that a certain percentage of sweater-level relationships won’t survive? Before the break-up, I’d begun an afghan for my mother. Its lace pattern was complicated, and the color she chose, “antique gold,” seemed to me dull mustard. Before finishing it, I was in graduate school where no one knitted in class, ever. I discovered I’d been in a bubble at Mount Holyoke. Elsewhere, an un-grandmotherly woman who knitted in public was the object of suspicion. Men mentioned Madame Defarge. Interest in knitting had declined and crocheting pretty much disappeared. In private, over time, I made myself a cotton shell, a mohair shawl, a Perry Ellis sweater with pleated ’80s shoulders. On trips, I’d search out a city’s only yarn shop, and find other women buying bags-ful, like the last addicts of an out-of-fashion drug. Other Mount Holyoke graduates tell me knitting was out of the question in science classes. Some mention the embarrassing clang of a dropped metal needle or being offended by people who called knitting sublimated sex, but many describe happily finishing first scarves and learning stitches from friends. Laurie Stein-Stapleford ’74 began knitting because a teacher came close to requiring it, saying, “You can’t listen if you’re busy writing.” Jan Baldini Bohn ’72 remembers a senior sociology seminar in which the professor knitted, expertly. There’s evidence this acceptance has a history. In a photo of 1949 English department lecture, students laugh and knit. The 1944 yearbook describes the afternoon hour when volunteers knitted for the military in the Mary Lyon Room, then adds, “But we are always doing knitting outside of hours, dropping our ball of yarn in classes, sacrificing the efficiency of both by trying to read and knit at the same time…” Llamarada 1942 says, “At the movies there was nothing like stretching your feet over the railing, knitting your sweater (providing it wasn’t cable-stitched) and watching Donald Duck or Charles Boyer.” Enthusiasm still bubbles in a 1917 New York Times article about war efforts at Mount Holyoke: “The girls are taking up courses in nursing and stenography and typewriting as a preparation for war work, and they knit all the time. It has now been forbidden at meal times.” Sixteen years after it left, the turtle sweater returned, along with its owner. Yes, Reader, I married him. But let me stick to the story of the sweater. It looked fine, not worn much, perhaps, but not discarded. When I first met my mother-in-law, she said she’d always thought a lot of love went into that pullover. Those patient turtles do testify to devotion, but they also remind me how I liked the process of listening and thinking while creating something with my hands. For knitting, too, what seemed an end was only hibernation. Needlecrafts came back in the ’90s, along with appreciation of almost-forgotten craftswomen’s mastery of geometry, color theory, and sculptural forms. Rebellion against manufactured sameness sparked a boom in crafting expressive garments, retro or avant-garde. Most fascinating to me has been the revolution in communal knitting, from “stitch-n-bitch” sessions in bars to guerrilla knitters’ projects that appear overnight in public spaces as protests or salutes. Knitting has been reconnected to education, including a new focus on teaching boys. Proponents of knitting programs in inner-city schools and prisons argue that use of fine motor skills helps with hyperactive restlessness, calms the mind, builds self-confidence, and leads to mastering other learning. Which isn’t so far, it seems, from where I started. After my mother’s death, as we sadly sorted through her things, my younger sister (Jerri Barrett ’83) said of course I must take what I had made. Today, in our (neolocal) home, the afghan, well-worn, is a patch of amber. I had no idea what would last, no idea how much I was stitching into memory. 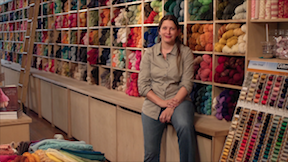 Imagine an old-fashioned dry goods store with yarn, fabric, and notions visible through large, glass windows. If you update that image with pops of bright color, a hip sensibility, and lively online presence, you’ll have Purl Soho, a modern craft emporium opened in 2002 by Joelle Hoverson ’89. A politics major, Hoverson was also passionate about photography and painting. She earned two fine arts degrees and maintained a studio even while working as a senior style editor for Martha Stewart Living Omnimedia. Yet when Hoverson left her job to paint full-time, she found herself pulled in a surprising new direction. “I would be in my studio and realize that I would rather be knitting,” says Hoverson. “Instead of angst, I decided to give myself over to women’s work.” Hoverson admits she would have been happy knitting rectangles for the rest of her life. Then Chicago-based photo stylist Kelly McKaig, with whom she worked on a freelance project, “pushed” Hoverson to learn more about knitting technique. McKaig, who later collaborated on Hoverson’s highly regarded craft books, proved to be a catalyst. “As a stylist, I was constantly shopping. It was my job to be familiar with retail, to know where the cool boutiques were,” Hoverson says. “There were a couple of neighborhood knitting shops and when I got burned out on being a stylist, I thought, ‘Why don’t I open a shop that features beautiful, amazing materials?’” Purl opened in a tiny storefront in Manhattan’s Soho neighborhood. It took Hoverson eight months to plan, but it took customers only a nanosecond to empty the shelves. “Purl could not have opened at a more perfect time for knitting,” she says. “My goal was to create a destination store, and everyone who was a knitter came out of the woodwork. I ran out of everything. Even the manufacturers were unprepared.” Purl has grown in a decade. The successful online business is managed by Jennifer Hoverson Jahnke, her sister. Purl Patchwork, a fabric shop that grew out of Hoverson’s love of quilting, opened in 2006. Today, knitting and sewing supplies happily coexist in a larger space; the sisters have a third partner, Page Marchese Norman. And the creative team behind the craft blog The Purl Bee has made it a go-to destination for inspiration. “The overarching change is that people take craft seriously now,” says Hoverson. “Craft, something you can actually teach someone how to do, is now viewed as legitimate.” —By Avice Meehan ’77

5 responses to “Strands of Time”