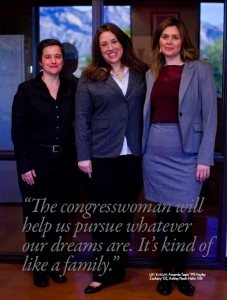 Three alum staffers of Rep. Gabrielle Giffords carry on after a shooting that shook the nation

To Americans, Gabrielle Giffords is an inspiration. A fighter. A symbol of courage. A role model. A hero. A walking miracle. But to a select few, including three Mount Holyoke alumnae, the US congresswoman from Arizona is all that and something else, too: a boss.

The lives of Giffords staffers Amanda Sapir ’99, Hayley Zachary ’02, and Ashley Nash-Hahn ’08 changed forever on January 8, 2011, when a gunman opened fire at a Giffords event in Tucson. Staffer Gabriel Zimmerman and five others were killed in the rampage; staffers Ron Barber and Pam Simon were among those seriously injured. Giffords herself was shot in the head. She survived, but sustained a traumatic brain injury. “In the history of our country, Gabby appears to be the only female elected official to be wounded in an assassination attempt,” Giffords and her husband, retired astronaut Mark Kelly, write in their 2011 book, Gabby: A Story of Courage and Hope.

On January 25 of this year the three-term Democrat resigned from Congress to focus on her recovery, and Sapir, Zachary, and Nash-Hahn’s lives changed yet again. As soon as Giffords’s resignation took effect, her congressional staffers became employees of the clerk of the House of Representatives, who will manage Giffords’s offices until her successor is chosen in a special general election on June 12. Giffords’s congressional staffers, including Sapir and Nash-Hahn, can keep their jobs until then. At Giffords’s request, Barber is running for her seat. The future is more uncertain for her campaign staffers, including Zachary. After all, Giffords has vowed to return to Washington.

“This whole year has been emotional—much more emotional than you would expect in a job,” Nash-Hahn, Giffords’s deputy communications director and legislative assistant, said in a phone interview on the day of Giffords’s resignation. “But I feel very good about this. The congresswoman and her husband will advocate for all of her employees. They told us they will help us pursue whatever our dreams are. It’s kind of like a family.”

Sapir, Zachary, and Nash-Hahn all say they never considered quitting their jobs. And although one of their colleagues was killed in the line of duty, none feared for her own safety.

Of Giffords, she said, “This is not the end for her. I think you can view it as sort of a pause. She’s making a very thoughtful and mature decision to give up her seat right now so she can dedicate herself fully to her therapy. She still does speech therapy, physical therapy, and occupational therapy every day, all day long, and she wants what’s best for her constituents. She gave up the seat so her constituents could have someone who could give 100 percent. This is what she needs, and this is what the district needs. It’s a positive decision.”

Is it unusual for three graduates of one college to simultaneously work for the same member of Congress? Sapir, Zachary, and Nash-Hahn think so, but they aren’t surprised it happened in Giffords’s case. “I think it speaks to her ability to connect with women and her stance as a strong woman in politics,” Nash-Hahn says. It could also have something to do with the fact that Giffords attended a women’s college (Scripps, in California). “I love having that connection with her,” Sapir says. “It’s always a source of pride.” Zachary recalls touching on the topic during her first interview with the congresswoman. “It was definitely something that made her smile when she saw it on my résumé,” she says.

Zachary, who has a law degree, and whose previous experience includes working on the presidential campaigns of Hillary Clinton and John Kerry, has been Giffords’s campaign finance director since 2009. She wrote the finance plan for Giffords’s second reelection campaign, helping carry the candidate to victory by raising more than $4 million from 8,000-plus donors. In the process, she developed a close personal friendship with Giffords.

“I was really honored to be part of such a wonderful team,” Zachary says. “I believe that often staff can reflect the qualities of their boss, and I think my colleagues reflected Gabby’s commitment to service, dedication to constituents, and endless energy. For the whole time I’ve known her, she has given work her all, held herself and us to the highest standards, and set a wonderful example for us.”

Like the congresswoman, Nash-Hahn is from Tucson. She moved back after Mount Holyoke and started volunteering in Giffords’s campaign office. She had seen some pictures of Giffords walking on a ranch in cowboy boots, riding a motorcycle, and standing in front of solar panels, and remembers thinking, “This woman is really cool, and she’s doing things, and she’s so young!” Giffords did not disappoint when Nash-Hahn got to know her. “She was so warm and inviting, and I just wanted to be around her,” she says. “Whatever she was doing, I wanted to help her.”

“This woman is really cool, and she’s doing things, and she’s so young!”
Ashley Nash-Hahn

Nash-Hahn’s volunteer stint eventually led to a job in Giffords’s congressional office in Washington. As a legislative assistant, she handled issues pertaining to health care, seniors, and women. Meanwhile, social media accounted for the bulk of her work in her other capacity as Giffords’s number-two press person. She was always posting to Facebook, Twitter, Flickr, and YouTube. In the aftermath of the tragedy in Tucson, when media requests were pouring in from around the world, Giffords’s office was “a great place to learn,” the twenty-six-year-old says.

Amanda Sapir grew up in a political family. Her parents owned an independent newspaper and served as elected officials, giving her an early glimpse into politics’ potential as a vehicle for public service. A student government president at Mount Holyoke, Sapir found in Giffords’s district office a place of employment that lived up to her high expectations for elected officials. “I was struck by how the office is anchored in public service and really being helpful, with a willingness to stake out middle ground in opposing views,” she says.

Giffords’s overarching goal was to have the strongest constituent service team in the country, according to her staffers, and she charged the late Gabe Zimmerman with hiring its members. Sapir came on board in 2008 as one of three constituent service representatives in Tucson (two others worked in Sierra Vista). All five were trained to field any request, but Sapir specialized in foreclosure prevention, among other issues. Preventing more than 150 southern Arizona families from losing their homes to foreclosure was one of her key accomplishments.

In all, Sapir completed 2,653 constituent cases in her tenure with Giffords. Together, the constituent service team handled more than 12,000 cases between January 2007, when Giffords took office, and January 2012, when she resigned. “Our office typically does much higher case workloads than even a [US] senator’s office,” Sapir says. “Gabe would say, ‘We are not get-it-off-your-desk people, we are put-it-on-your-desk people.’”

Zimmerman’s death in the shooting dealt a particularly hard blow to Sapir. “Gabe is—will always be—a dear friend of mine,” she says. “I love him very much. I would wear a path in the floor to his office. I was constantly talking to him.” In fact, it was during one such conversation, as Sapir was getting ready to leave the office on Friday, January 7, 2011, that Zimmerman unexpectedly excused her from staffing Giffords’s ill-fated “Congress on Your Corner” event the following day. As she remembers it, he said, “You know, I think we’ve got it covered.” Surprised to suddenly have a free weekend, she responded, “Wow, this must be my lucky day.” He looked at her and said, “Yes, it is.” Those were the last words they spoke.

In a chapter of Gabby titled “What Would Gabby Want?” Giffords and Kelly recount the events of the day after the shooting: “On January 9, Gabby’s staffers met in Tucson with a counselor employed by the House of Representatives. They were heartbroken, angry, shell-shocked. They spoke of survivor’s guilt. They cried together. And then they went back to work.”

Sapir, Zachary, and Nash-Hahn all say they never considered quitting their jobs. And although one of their colleagues was killed in the line of duty, none feared for her own safety. Sapir, the only one of the three based in Tucson, has experienced neither nightmares nor survivor’s guilt, she says. However, as a graduate student in counseling psychology she was required to be in therapy, and it helped her cope with the tragedy. “Fortunately I already had a really strong relationship with my therapist,” she says, “so everything that happened I just folded into my counseling sessions.”

Zachary, for her part, counted her blessings. “This has been quite a difficult haul, but I’m surrounded by supportive, wonderful friends and family,” she says. “This event has given me a good reminder to reflect and be appreciative of the things we have and to work hard for the change we want to see in the world.” Like most of her fellow staffers, she wears a turquoise “Peace Love Gabby” bracelet every day. Proceeds from the sale of the silicone wristbands, which were created by two Giffords interns, support a scholarship in Zimmerman’s honor.

Zachary and her colleagues may have been leaderless in 2011, but they were hardly rudderless. Giffords had already laid out her goals for the year, so her staffers’ mandate was “pretty clear-cut,” Nash-Hahn says. They knew her constituent service priorities and her legislative priorities. What would Gabby want? They didn’t have to ask. They just kept on keeping on. 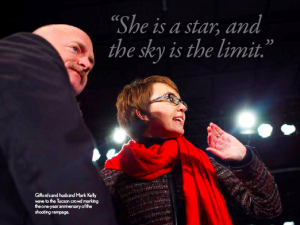 A Star Still on the Rise

If anything changed, it was the intensity with which they tackled their jobs. They wanted to fulfill Zimmerman’s vision of helping people, and they wanted to honor Giffords, whose progress is a constant source of inspiration. “I’ve always loved this job because I feel like it’s good government at work,” Sapir says. “Now I feel more deeply inspired because my leader, who is so committed to her work and to her constituents, had this terrible thing happen to her and to our community. And the way she is persevering and recovering—I mean, it makes me stand taller.”

After Giffords resigned, Sapir continued to do casework on behalf of the people of Arizona’s eighth congressional district. Her job is unchanged, but with an end date of June 11, she is applying for positions in her field in Tucson and Washington.

Nash-Hahn is archiving all of Giffords’s constituent work, legislative work, televised interviews, newspaper clips, and other papers. She, too, is looking for a new job. She thinks she’ll stay in communications, and may even work for a different member of Congress. That would be hard, she says, because “Congresswoman Giffords is a very special member.”

Zachary’s future is up in the air in a different way. During the year spanning January 2011 to January 2012, she worked to ensure Giffords was in as strong a position as possible if she decided to run for reelection. When the congresswoman instead resigned, her campaign followed the procedures set out by the Federal Election Commission, and Zachary committed herself to the more ambiguous goal of ensuring Giffords is in a good political position should she choose to return to public service down the road.

Sapir hopes Giffords will do just that. “We love and admire the congresswoman, so we were naturally heartbroken to see her resign,” she says, speaking for her fellow staffers. “However, there is a shared sense of pride in how she stepped down with such grace and dignity. We are all confident in her recovery and look forward to her entering public life again soon as Governor, Senator, or President Giffords. She is a star, and the sky is the limit. Actually, with an astronaut husband, not even the sky is the limit, so her next chapters are going to be very, very exciting.”