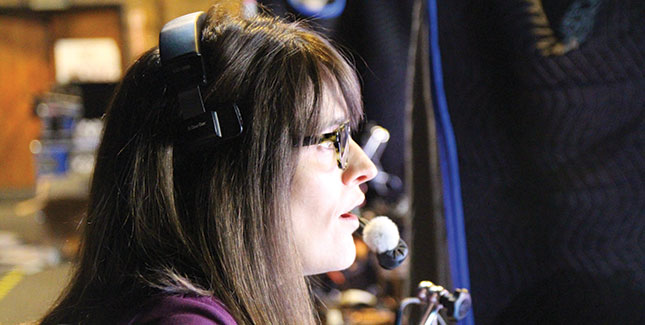 Dorien Davies ’98 didn’t always dream of being a puppeteer. Instead, her journey into the tightly knit world of puppeteering began after years of acting and writing comedy productions.

Before an encounter with the famed Jim Henson Company guided Davies onto her current path, she majored in theatre at Mount Holyoke. As an undergraduate she was drawn to comedy but says she “always felt that comedy was somehow not legitimate.” After graduating, Davies moved to Los Angeles and spent her first decade out of college challenging this notion and developing what would become a unique comedic style, honed during years of doing improv comedy.

In LA, Davies began attending Henson Company-sponsored workshops, where she learned puppetry skills from seasoned puppeteers and nurtured a connection with the art form. Soon she found her niche and launched what has become a successful and unique career.

I always felt that comedy was somehow not legitimate.Dorien Davies ’98

Within the puppetry community, Davies represents a rare group—digital puppeteers. She defines digital puppeteering as puppetry in which every movement animates the character. On the children’s television show Word Party, Davies does both the voice and facial movements of an effervescent purple panda named Lulu, whose body is controlled by a different puppeteer. To develop the role, she says, “I locked myself in a room and learned all the songs,” mastered the voice, and perfected “every mouth shape,” developed to animate the character more fully.

When she booked a significant role in the 2017 Netflix show Julie’s Greenroom, another Henson Company-produced project, Davies faced the choice of leaving her husband and young daughter behind in California to film in New York City. But, she says, “The coolest thing about Henson is that everyone [who works there] is a parent.” The company hired her husband as well, and the family moved together to New York City during the months of the filming.

With a career constantly in flux, Davies, who also works as a voiceover artist and actress, eventually would love to write and produce her own show. “That’s where I’m moving,” she says. She hopes to build on the experience of writing an episode for Word Party and is now putting more time into her own independent projects.

This article appeared as “Bringing Beloved Characters to Life” in the fall 2017 issue of the Alumnae Quarterly.