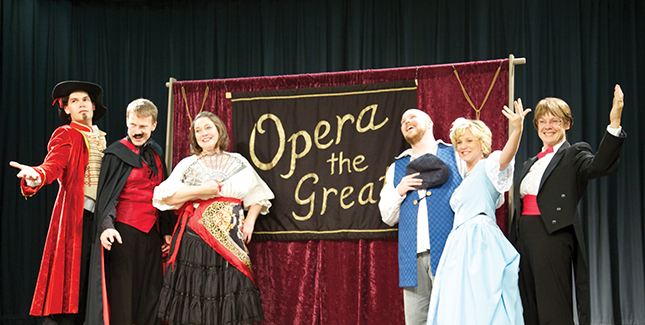 For more than five years Kathryn Hobbie ’69 and her cast of characters have been entertaining and educating elementary school children about the world of opera. Through the production Opera the Great Hobbie and five performers from the nonprofit Opera Quest Northwest travel to elementary schools in southwest Washington to prove that opera isn’t just for the older crowd.

The show begins when the comedic Buffo leaps onstage, singing from The Marriage of Figaro, explaining he’s been asked by the
principal to fill in after the “scheduled” assembly was canceled. In this way the children come to the experience with no preconceived notions. Other characters gradually join in, creating a show that features a love story, a villain with a magic potion, and a femme fatale.

“What’s an opera without Carmen?” says Hobbie, who functions as the one-woman orchestra.

While presenting a brief history of opera, the show also educates students on opera’s languages, vocal ranges—soprano, tenor, bass, mezzo soprano, and baritone—and inspirations, such as myths and fairy tales. During each production student volunteers are invited onto the stage to play the roles of Papa, the villain’s evil assistants, and the maid who saves the day.

By the end of the show, which includes a question-and-answer session, the children walk away with an impressive amount of knowledge about opera and its origins. The group also provides curriculum materials to teachers to facilitate continuing education and exposure to the world of opera.

What keeps us all charged up is the reaction from the kids.Kathryn Hobbie ’69

Hobbie, who is also president of the board of Opera Quest Northwest, is proud to share that the performances are held at no cost to the schools. “We feel very strongly about that,” she says. “Most public schools are hard-pressed for arts money, and some have eliminated music altogether. Given this trend, our mission seems more important than ever.”

A music major at Mount Holyoke and pianist for the Chamber Singers, Hobbie spent most of her career in the nonprofit sector as a writer and communication consultant. Familiar with what it took to raise money for nonprofit organizations, Hobbie cofounded Opera Quest Northwest in 2013 to exercise her love of performing. (She’s also an active chamber musician.)

Located in Clark County, Washington, which has roughly sixty-six elementary schools and counting, Opera Quest Northwest performs an average of twenty-two shows per year. The group is on track to hit every third-, fourth-, and fifth-grade class in any given three-year cycle, helping achieve their mission to instill a love of music and the performing arts in their community.

“What keeps us all charged up is the reaction from the kids,” says Hobbie. “I can still remember the first time we took this show into a school, and right from the start they were laughing and clapping. There’s a great joy in that, which keeps you going.”

This article appeared as “Encouraging a Love of Opera” in the fall 2017 issue of the Alumnae Quarterly.