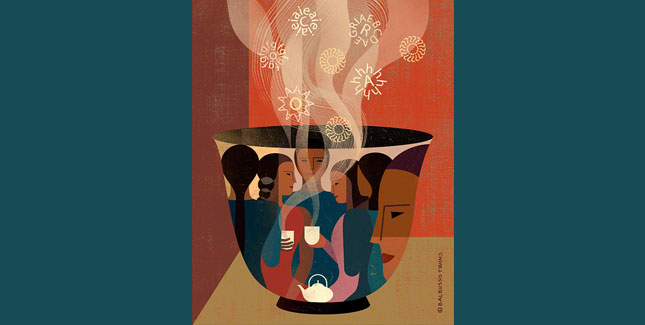 If walls could talk, the walls of the Eliot House lounge could tell you the stories of our lives. The stories we shared with each other of our childhoods and college years, our loves and losses, and the fervor with which we could spend an entire night comforting a friend. How we found ourselves opening up in ways we never thought possible.

How many cups? Hands go up around the room and women (most of whom I know) have already begun to congregate in one corner of the lounge. We will end up glued here—I am sure of this—for at least the next couple of hours. For if there is a first round of chai, there must be a second. One half hour becomes two hours. And one by one we have readjusted our plans for the day; we are looking for excuses to make each other stay.

More women join us, and our circle widens. We slip in and out of each other’s conversations and rants, joining one friend passionately, listening to another with pride. The faces and positions around our circle shift, but they always return; we come back to join the larger circle, to become whole again.

All we are doing, really, is talking and filling ourselves up with caffeine. Still, I begin to consider this space sacred, because I have rarely encountered anything like it in my life.

In the comfort of these brown women, I touched upon an experience I had never allowed myself before: the power of an intimate, all-women space. I began to think of my politics differently.

I had classes, professors, a whole range of electives and readings helping me grow intellectually. I could finally articulate my beliefs and experiences in a sophisticated language! I could now name the workings of power, its hold on me, cite theories to back up my statements.

But here, in a corner of Eliot House, where brown women were gathering and affecting each other’s learning, a different kind of politics was making its mark on me. In the classroom, I learned to theorize on feminism for hours, but it was in Eliot House, among these women, that I finally claimed the term. It was here, the first time I told a woman, aside from my sister, that I had survived child abuse. Here it was that my friends had a sort of intervention, helped me see that perhaps my boyfriend’s behavior was emotionally abusive.

Here is where we gave each other courage.

Until these chai circles, I had not allowed myself to own the power created by a women-only space. I had assumed that a closed space—one that excludes men—is hostile, uninviting, and contrary to our movements. But in a patriarchal world, women are so rarely given a space to dissociate, breathe, laugh, and learn untethered by insecurities and preconditions. I had never paused to think perhaps a women-only space isn’t a contrary space at all. That in fact, it is essential: before we tackle the rest of the world, we must first build from within.

If our coming together is grounded in the kinds of relationships and spaces where we can divulge our greatest fears and regrets, where we can let ourselves be silly till morning, where we are willing to stay up with a heartbroken friend all night, how much more powerful will that make the rest of our politics?

This sounds so simple, but it is the most radical lesson I have learned.

The first night I slept on the orange couch in the Eliot House lounge, I woke up to watch sunrise from the terrace. I didn’t know it at the time, but that spot, place, and time would become my safe haven, and my touchstone for solidarity.

Many years later, I think it is instructive that this solidarity began with shared cups of chai.

Sadia Khatri ’15 lives in Pakistan, where she is a member, with other Mohos, of the feminist collective Girls at Dhabas, a project that grew out of her chai-filled conversations at Eliot House. This essay is adapted from a longer piece Khatri published in August 2017 in the women’s zine The Ladies Finger.