MoHome Memories: A Gathering of Scholars 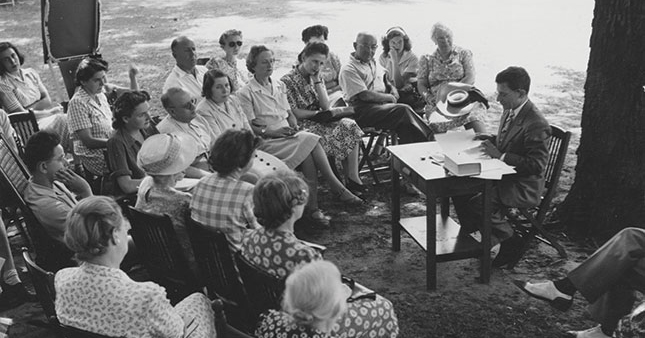 During the most volatile years of World War II, Mount Holyoke saw a slew of extraordinary visitors as the College played host to the Entretiens de Pontigny, an intellectual gathering of European and American scholars. Founded by philosopher Paul Desjardins as Décades de Pontigny in 1910, during wartime these meetings moved from Pontigny Abbey in France to Mount Holyoke, which offered a refuge for persecuted academics.

In 1942, Mount Holyoke representatives began working with L’école libre des hautes études, the French university established in New York by French and Belgian scholars, to reignite these discussions. Exiled Sorbonne professor Gustave Cohen, who helped found the university, spearheaded a committee that included its president as well as several of Mount Holyoke’s own: Helen Patch, class of 1914, and Pierre Guédenet of the French department and philosophy professor Jean André Wahl, also a former Sorbonne professor.

The first summer session of L’école libre des hautes études at Mount Holyoke took place in August 1942. The aim was to create a platform of French culture where students met with scholars to discuss research projects and to acquire fresh perspectives. The work was a departure from undergraduate coursework and gave students—from Mount Holyoke and other institutions of higher learning—opportunities to expand their education.

For four weeks, Pontigny-en-Amérique welcomed a diverse array of distinguished guests, including actors, ambassadors, journalists, diplomats, economists, and architects. Discussions were rigorous and covered topics as varied as “Literature and the Idea of Crisis” and “The Place of the Spiritual in a World of Property.” By the end of the session, more than 200 guests had attended, with representation from at least thirteen countries.

By 1943, participants were even more diverse, representing two dozen nationalities and more than thirty colleges and universities. For one more year, Pontigny was held at Mount Holyoke to great success and acclaim, but after the liberation of France in 1944, the gathering of intellectuals resumed its place in France.