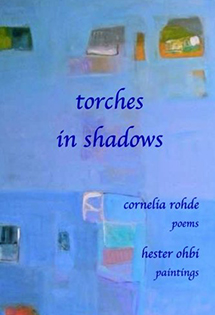 Combining contemporary poetry and painting, Torches in Shadows is a selection of the work of collaborating artists Cornelia Rohde and Hester Ohbi. Whether shadow dancing in the Amatola Mountains, gazing into the eye of an octopus on the Grand Bahama Bank, sailing through rice fields in Bengal, or observing a snail in a Zen garden, the poems engage us with their diversity, and often entice the reader into the unexpected: feeding a dung beetle passion seeds, creating blushing confections of verse with Neruda, or finding the sources of hidden river gods. The images in the paintings and poems are by turns amusing, surprising or intangible, but always off-beat and evocative.

Hester Ohbi ’63 and Cornelia Rohde ’63 met at Mount Holyoke and have kept in close touch for five decades, sharing poems and paintings along the way. Ohbi creates her internal images in paintings, and Rohde expresses hers in poems. With their love of resonating words and colors, it was natural to pair their endeavors into a collection that reflects the affinity of their vision. 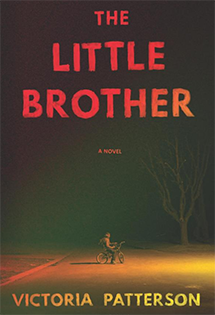 Life is pretty sweet for Even Hyde. Despite his parents’ divorce in 2001, he’s doing just fine, having chosen to live with his richly successful father in Newport Beach, California. When not spending “bonding” time with his partially absent father, he has his run of the house, where he more or less comes and goes as he pleases. Even’s older brother Gabe continues to live in Cucamonga with their emotionally unstable mother. Though he feels discarded and left behind, Gabe visits Even and their father on the weekends. Even doesn’t seem too worried about Gabe’s quick-to-ignite temper or his tendency to skip school. But then Gabe commits a crime so unbelievably heinous that Even can’t forgive him. In his personal recounting for The Little Brother, Even shares the events immediately following the crime. Ultimately he is left to decide whether he should turn his own brother in to the police or protect him.

Victoria Smith Patterson ’92 is the author of the novel The Peerless Four. She also wrote This Vacant Paradise, selected as an Editor’s Choice by The New York Times Book Review. Drift, her collection of interlinked short stories, was a finalist for the California Book Award and the 2009 Story Prize. The San Francisco Chronicle selected Drift as one of the best books of 2009. Her work has appeared in various publications and journals, including the Los Angeles Times, Alaska Quarterly Review, and the Southern Review. She lives with her family in southern California and teaches at the Antioch University’s Master of Fine Arts program and as a visiting assistant professor at UC Riverside. 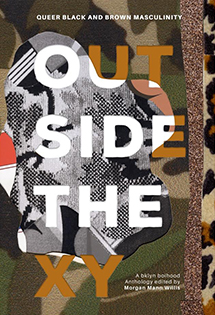 OTXY is filled with stories, confessions, essays, poetry, and letters from QTPOCs (queer, trans, people of color) around the world for whom masculinity has played a role in shaping their identities. Resi Polixa’s poem is included in the anthology.

Resi Polixa ’11 is a storyteller in many ways. A history major at Mount Holyoke, they are now a national park ranger, telling stories across the country of early feminists, labor activists, and immigrant workers. They were also active in the spoken-word poetry scene at Mount Holyoke, as a member of AiR, or Asian-American Interpretive Realities, which proved instrumental in understanding their own identity as a genderqueer Asian-American. They received their master’s degree in public humanities from Brown University in 2014. This is their first publication. 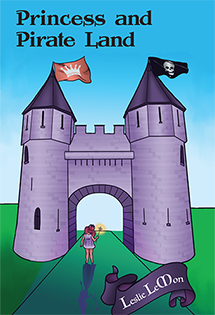 Dorcas is a plain but enthusiastic girl who just wants to be a princess. When her local theme park teeters on the edge of destruction, Dorcas shows that being a princess takes more than a tiara. Her parents, her teachers, her friends — none of them think Dorcas is princess material. She’s too loud. Her hair’s too big. But it’s not as big as her dreams, and no one will keep her away from the princess auditions at Princess and Pirate Land, a theme park with more than a passing resemblance to Disneyland. But all is not well at Princess and Pirate Land. Crowds are down. The rides are old. And a mysterious “Phantom” stalks the park, sabotaging rides and disrupting events. Someone wants Princess and Pirate Land shut down for good, its property sold to developers who want to build a shopping mall on the site.

Leslie Le Mon ’90 is an American writer and designer. Raised in Germany and New England, she has lived in Los Angeles since 1992. She is the author of the unauthorized Disneyland Book of Secrets series (history and guide books) and the young adult novel Sircus of Impossible Magicks. 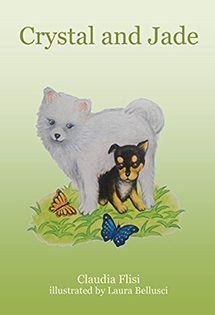 Claudia Engelman Flisi ’69 sold her first story when she was 16 and has been writing professionally ever since. Crystal and Jade is her first published book for children, but she has contributed chapters to books about finance, franchising, politics, and sex. She won three writing awards from the International Association of Business Communicators. She earned her bachelor of arts degree with distinction from Mount Holyoke College and a master’s degree from the Johns Hopkins University School of Advanced International Studies. She has studied in England and Italy and lived in six countries. Her personals include an Italian husband, two quadri-lingual sons, and dogs from three countries (Italy, France, and Spain). Her immediate goals: publishing her next book and visiting one-hundred countries. The latter is within reach. 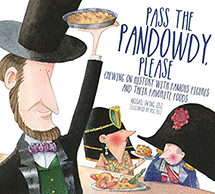 Pass the Pandowdy, Please: Chewing on History with Famous Folks and Their Fabulous Foods

What do Napoleon, Cleopatra, George Washington, Gandhi, Queen Victoria, Columbus, Neil Armstrong, Montezuma, Paul Revere, Babe Ruth, Abraham Lincoln, Sacagawea, and Katsushika Hokusai have in common? They are all among the historical figures portrayed in this book by writer Abby Ewing Zelz and cartoonist Eric Zelz. Just like us, the great movers and shakers of history had to eat, and their favorite foods turn out to be a thread to follow through the history of our small planet.

Anne (Abigail) Ewing Zelz ’81, her husband Eric Zelz, and their daughter, Charlotte, enjoy history, food, and travel. Abby has worked as a curator and educator in history museums and has contributed to historical and educational publications. Eric has worked as an illustrator and designer with newspapers for many years. This is their first children’s book. 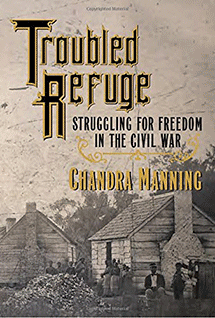 Troubled Refuge: Struggling for Freedom in the Civil War

From the author of What This Cruel War Was Over, a vivid portrait of the Union army’s escaped-slave refugee camps and how they shaped the course of emancipation and citizenship in the United States. Drawing on records of the Union and Confederate armies, the letters and diaries of soldiers, transcribed testimonies of former slaves, and more, Chandra Manning allows us to accompany the black men, women, and children who sought out the Union army in hopes of achieving autonomy for themselves and their communities. Ranging from the stories of individuals to those of armies on the move to debates in the halls of Congress, Troubled Refuge probes the particular and deeply significant reality of the contraband camps: what they were really like and how former slaves and Union soldiers warily united there, forging a dramatically new but highly imperfect alliance between the government and African Americans. 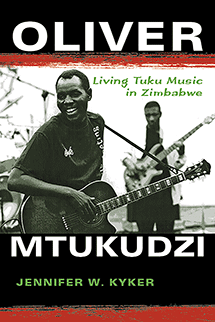 Oliver “Tuku” Mtukudzi, a Zimbabwean guitarist, vocalist, and composer, has performed worldwide and released more than fifty albums. One of a handful of artists to have a beat named after him, Mtukudzi blends Zimbabwean traditional sounds with South African township music and American gospel and soul to compose what is known as Tuku music. In this biography, Jennifer W. Kyker looks at Mtukudzi’s life and art, from his encounters with Rhodesian soldiers during the Zimbabwe war of liberation to his friendship with American blues artist Bonnie Raitt. With unprecedented access to Mtukudzi, Kyker breaks down his distinctive performance style using the Shona concept of “hundu,” or human identity through moral relationships, as a framework. By reading Mtukudzi’s life in connection with his lyrics and the social milieu in which they were created, Kyker offers a portrait of one of African music’s most recognized performers.

Jennifer Kyker ’02 holds a joint appointment as assistant professor of ethnomusicology at Eastman School of Music and the College of Arts, Sciences, and Engineering at the University of Rochester. She graduated from Mount Holyoke College with degrees in economics and French. 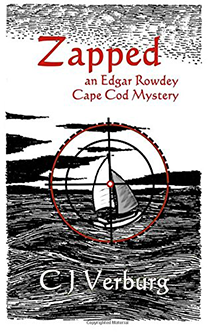 A posh seaside lawn party. To Cape Cod inventor Pam Nash, it’s the ideal launch for Zappa, her new “Taser for pacifists.” To her daughter Ashley, in Las Vegas getting divorced, it’s the ideal way to shake off a stalker and celebrate turning twenty-one. For Lydia Vivaldi and Mudge Miles, sous-chefs at Leo’s Back End, it’s a catering opportunity they can’t refuse. But when a reveler is found dead in the water off the Nashes’ dock, it’s time for local artist, author, and eccentric genius Edgar Rowdey to turn sleuth before the killer destroys Pam, her family, and Zappa.

Carol (CJ) Verburg ’70 is an award-winning playwright, theater director, and author of best-selling books, including the international literature collections Ourselves Among Others and Making Contact. After graduating from Mount Holyoke College, where she wrote the book and lyrics for Junior Show, she became a cocktail waitress, a part-time boat-builder, and then a textbook editor in Boston and San Francisco. Her mystery, Silent Night Violent Night, is an homage to the noir side of publishing. For many years Carol lived on Cape Cod, up the road from the artist and author Edward Gorey. They became close friends and frequent collaborators on a variety of theatrical and other adventures, which inspired her multimedia memoir Edward Gorey On Stage and her mysteries Croaked and Zapped. 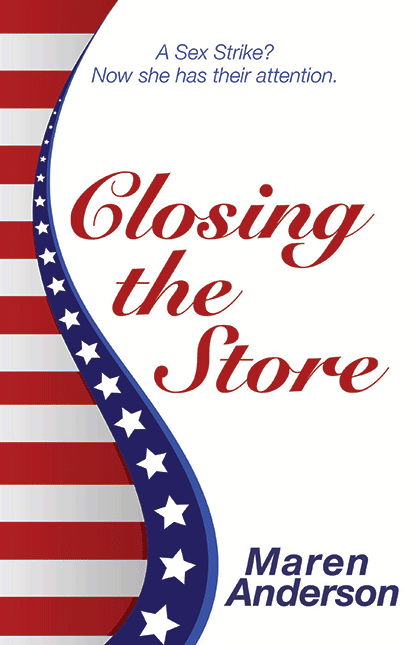 Closing the Store is a retelling of the Ancient Greek farce Lysistrata by Aristophanes, where women decide to end a war by cutting their men off, sexually. It isn’t quite on purpose that Liz Stratton finds herself running for president in a country mired in a deadly but pointless war. But her brash, no-nonsense wit is just what the people have been waiting to hear. Along the way Liz must contend with her own budding romance, a difficult thing to have when you’re the face of feminist abstinence.

Maren (Rachel) Bradley Anderson ’95 is a writer, blogger, and alpaca rancher, who teaches literature and writing at Western Oregon University. She holds master’s degrees in both literature and writing from Humboldt State University and a BA in English from Mount Holyoke College. Anderson lives in Monmouth, Oregon, with her husband. Anderson’s other recent published work includes Fuzzy Logic, a novel about romance on an alpaca farm; poetry in The Timberline Review; and production of her adaptation for kids of A Midsummer Night’s Dream in July 2015.