My Voice: Where are the Women’s Voices?

In 1977, when I was the only woman teaching full time at the newly formed Yale School of Management, I attended a community meeting of students, faculty, and staff that addressed a range of topics. There were about forty people in the room. The men, and a smattering of women—all graduates of women’s colleges—sat in the front. Most of the women sat in the back. All of the discussion emanated from the front. Finally one young woman in the back blurted out, “You aren’t listening to us,” and one of the young men in the front said, “You can’t sit back there and tentatively put your hands up. Lean in, and speak up.” 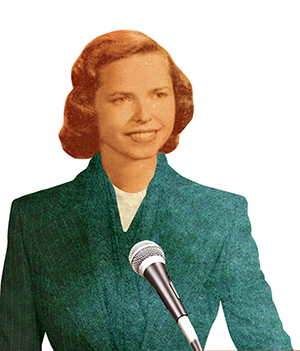 Will we still look like this in thirty years?
Image by: Ellen Weinstein

When I tell this story today, more than thirty-five years later, some women insist, “That was then, this is now.” I wish I could agree. Until I retired recently, I was a founding partner in a boutique management communications consultancy with a worldwide practice, and I can tell you: that was then and still is. A female executive, second in command at a major company run predominantly by women, told me not long ago that at a meeting of about twenty corporate leaders of socially progressive companies, only one woman participated in the day-and-a-half-long discussion. The others sat silent, including the woman who shared the story. A third of the attendees were women, and they spoke among themselves outside the meeting but not during the discussion, because, I was told, “They wouldn’t stop so we could talk.” One of the men commented on their silence, but the women still did not participate.

Another story: A journalist in her thirties who writes for a regional newspaper told me that she had been a broadcast communications major in college and switched her focus to writing, saying, “My voice is soft, and I couldn’t be heard.”

My most recent discouraging experience occurred at a religious service during which five women were readers. Not one could be heard beyond the third row of a sanctuary that held fewer than 100 people; not one looked up from the page. Even when they had the stage, these women made no effort to be heard.

We need to speak to the imaginary person standing against the back wall.
Judy Stein ’56

Most of the reasons women give for why they don’t speak up relate to what men do or don’t do. If women want change, we will have to speak up. Men will listen when we speak with authority; men won’t interrupt when we stop the interrupter. We don’t need to yell; we need only be forceful enough to get attention. Yes, many of us have a different style, but we need to get into the conversation. And as for our “soft voices,” we need to speak to the imaginary person standing against the back wall.In more than thirty years of working with executives, male and female, to address communications issues, I repeatedly heard from women that men “don’t listen,” “interrupt,” or “talk too fast.” Numerous women told me, “I am uncomfortable breaking into a conversation,” “My voice is soft,” and “We have a different style; men need to take that into account.”

If we do not take responsibility for being heard, if we do not model this for our daughters and granddaughters, I am fearful that thirty years from now a young woman in the back row will finally blurt out, “You aren’t listening,” and a young man in the front will say, “You have to speak up.”

5 responses to “My Voice: Where are the Women’s Voices?”