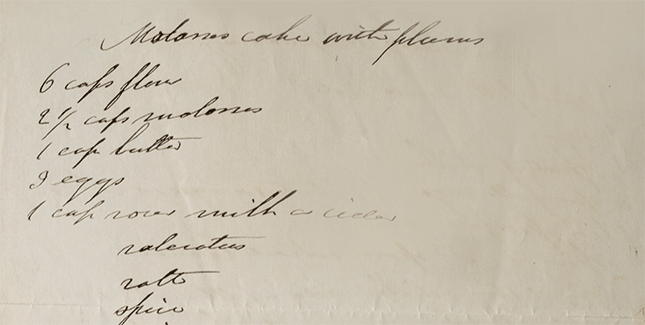 Among the collection of Mary Lyon’s manuscripts housed at Mount Holyoke are several recipes written in Lyon’s own handwriting. The recipes instruct the reader how to make some of the popular desserts of the time, including molasses cake and apple “dumplins.” Mary Lyon wrote down several such recipes as well as some “housekeeping hints” and ideas for meals. In one note a list of possible vegetables for a dinner includes squash, beets, turnips, and parsnips. In another she reminds the reader to “be careful to rub rice & beans between the hands in washing.” It isn’t clear who these tips were meant for; perhaps they were intended to help her students in their compulsory domestic duties around the Seminary.

These documents, dated 1845–1847, are just a few in Mary Lyon’s extensive collection housed at the College’s archives. 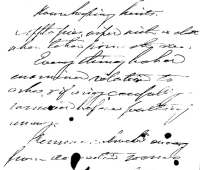 Want to make your own molasses cake? View this and more of Mary Lyon’s recipes and housekeeping hints.
Web exclusive