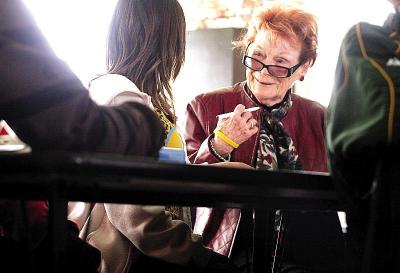 “Retire,” Rhea DeHart ’42 told the Santa Cruz Sentinel in 2002, “I don’t have a good thing to say about that word. There’s so many good organizations that need people to serve. The giver gets more than the person who receives.”

Despite her years, DeHart has never really retired. She has been a teacher, a union president, a board member, a school district president, a city planning commissioner, a non-profit vice-president, and even the director for a center of performing arts, just to name a few. For the past forty years, Ms. DeHart has been a tireless educator and community activist, and even on the passing of her ninety-first birthday earlier this month, she has no plans of stopping.

DeHart began her career in education at Mount Holyoke, receiving a bachelor’s degree in US history and later an MA in teaching. After taking her first teaching position in Georgia in 1943, she finally settled in Santa Cruz, serving the Pajaro Valley School District (PVUSD) where should would begin a long and prosperous career. For more than forty years there, DeHart taught middle school and high school students until officially “retiring” in 1984.

DeHart then began a fruitful career as a community leader in the Santa Cruz area. She most notably served as the president and field representative of the local teacher’s union, as the president of the PVUSD board of education, and as a city-planning commissioner for Watsonville. Until this day, she is a common fixture at frequent city council meetings. In addition to her work for city government, DeHart is also an active member in a number of non-profit organizations in her area.

In recognition of her tremendous work, the Pajaro Valley honored DeHart with the 2009 Tony Hill Award for community service. Luis Alejo, Watsonville’s then vice mayor, said that there was no contest. “Everyone knows Rhea is the hardest-working elected or appointed official in the Pajaro Valley,” Alejo said. “Her dedication to the students and young people of the area exemplifies public service.”

Today, DeHart is still as busy as ever before. After having undergone two hip replacements and beating cancer, Ms. DeHart continues to serve actively in her various public service and philanthropic endeavors and in 2009, she even returned to teaching as a substitute history teacher.

“You need to get involved with your community,” DeHart said during an interview with the Santa Cruz Sentinel last year. “It’s the only way you get to make a difference, and making a difference is really important. That’s what life’s all about.”