My Voice: Saying No (Or Not Now) to Marriage 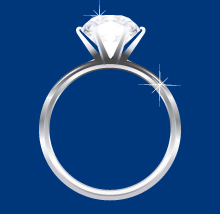 Watching the sun set over the Baltic Sea is breathtaking. The calm water mirrors the sun’s pastel tones. The Swedish fishing village winds behind us, houses peppering the landscape. I hear my name and turn to see my then-boyfriend kneeling in front of me, holding a little square box. A three-stone engagement ring. Past. Present. Future. My heart palpitates and my palms sweat. I say Yes. Four months later, I say No.

 I am not alone in my reluctance to marry. The Pew Research Center found that only 9 percent of those ages eighteen to twenty-four were married in 2010. Fifty years earlier, the figure was 40 percent.

My generation is delaying marriage or rejecting it outright for a variety of individual reasons, including putting career first, paying off debts before coupling up, and dissatisfaction with consumer-centric wedding culture. But I believe there is also a greater underlying issue—the false expectations raised by a rose-colored world of engagement-ring commercials and romantic fiction and films. Are we unable to commit to a real person if our own love plot doesn’t match those in Pretty Woman or The Notebook?

In an age where we don’t need to be married, is there a point to marriage?
Cameron J. Steese ’07

This age of instant gratification also contributes to the reluctance to commit. The message of online dating websites is that there is someone out there for everyone. With millions of potential Prince/Princess Charmings, there is plenty of opportunity to look around before we settle down. This also leads to the expectation of finding one perfect person. The key word here is perfect: this person will know everything about us intuitively and be our intellectual, social, and sexual equal.

I also notice that most romantic films end at the marriage ceremony or shortly thereafter. There is no acknowledgment of the hard work a successful marriage takes. My parents’ thirty-year relationship is built on the pillars of all things good about matrimony, but it isn’t always a fairy tale. Many of my MHC friends who come from divorced households find it even harder to believe that marriage is a blissful institution. Perhaps we are all just in it for the fun part—the chase. In an age where we don’t need to be married, is there a point to marriage?

While a number of us have no interest in marriage, it is remarkable how very important it still is to many people. At twenty-eight, I’m starting to feel the push. My Facebook newsfeed clutters with announcements of proposals, weddings, and pregnancies. I go to bars and realize I’m in the upper third of the age bracket. Coworkers, family members, and even a few friends don’t know what to talk to me about anymore. I don’t fit into a bracket. Tricky.

Four months later I said No. Why? I can say now that it was because I wanted more of my life. I wanted to travel, find my own apartment, and look for jobs without needing to consider another person. I wanted to have more love affairs, have my heart broken. I wanted to know what it was like to resoundingly stand on my own two feet. In short, I wanted to belong to myself and pen my own story. Perhaps this is why we wait.

Cameron J. Steese graduated from Mount Holyoke in 2007 with a bachelor’s degree in english. She currently works as the associate director of admissions at St. Timothy’s School in Maryland. This article appeared in the fall 2013 issue of the Alumnae Quarterly.

2 responses to “My Voice: Saying No (Or Not Now) to Marriage”