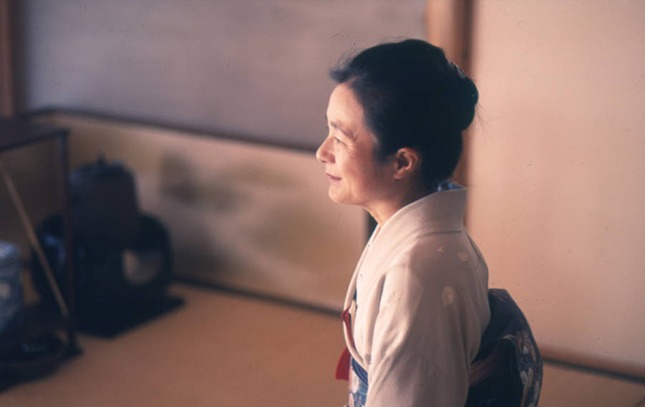 Dr. and Mrs. Yamashita changed the lives of a generation of Mount Holyoke students through their dedication to education in East Asian Studies. One part of their exemplary work was realized in the construction of the tearoom Wa-shin-an, completed in 1984 and named by the Urasenke grand master Sen Soshitsu XV (now Sen Genshitsu). From its opening until her retirement in 2013, Mrs. Yamashita, an instructor of the Urasenke school of Tea holding the professional name Socho, held open weekly demonstrations of the tea ceremony and also taught students in private lessons. For nearly thirty years she transformed the world of the students in her care through the practice of tea, rooted in the four principals of Wa, Kei, Sei, Jaku (Harmony, Respect, Purity and Tranquility).

Yamashita-sensei’s example led me on a path to continue practicing tea for more than ten years, both in Japan and the United States, including having the great privilege of performing the demonstrations at reunion for the past two years. Whether cherishing the single moment of one of her demonstrations or being inspired by her example to learn more about tea practice, Yamashita-sensei’s legacy lives on in her students. One of those students, Alison Birch ’87, shares her own memories of practicing with Yamashita-sensei, the construction of the tearoom, and its lasting impact.

“As an Asian studies major and student of Professor Tadanori Yamashita, I was lucky enough to be invited to help with the creation of the Wa-shin-an teahouse and garden in 1984. The architect, Teruo Hara, arranged for the delivery of many, many bags of seemingly identical white stones to be used in creating the Zen meditation garden in front of the teahouse.

“The simple solution to placing the stones would be to empty out each bag of stones right in the middle of the garden and then rake them into order, but Mr. Hara instructed us students to chose each stone individually. We spread the stones out in front of Eliot House and selected each stone, one by one, prior to placing it carefully in a spot in the garden that we discerned as being the correct place for the correct stone. Naturally this took much longer than just dumping the bags out and hoping for the best, but I like to think that part of the peace and tranquility of Wa-shin-an derives from the care that was taken with every detail of the garden.

“Later, when I started studying tea ceremony with Mrs. Nobue Yamashita, the Tea Ceremony Master who imbued Wa-shin-an with her dedication to perfecting the ritual of the Japanese tea ceremony, I had an even deeper appreciation of the importance of ensuring that every detail is correct, from the precise movements needed to whisk a cup of macha right down to the smallest stone.

“During my final tea ceremony, performed for my family the day before I graduated in 1987, I slipped one of the smooth, white stones into my kimono sleeve. This stone traveled with me to Manhattan, where I started my career, and then to Japan when I was transfered to my company’s Tokyo office. I hope that Wa-shin-an remains a vital part of Mount Holyoke College so that when I visit this September, accompanying my daughter who is a rising freshman, I may slip that white stone gently back into the exact, correct spot that it is meant to occupy.”